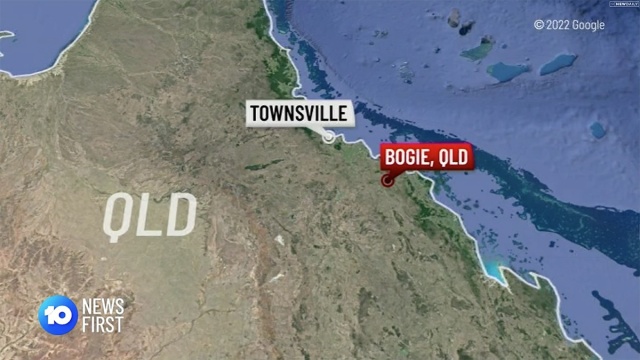 Three people are dead and a man is fighting for his life after a mass shooting in rugged terrain in North Queensland.

The gunman remains on the run as police lock down the area surrounding the scene of the shooting, a rural cattle property at Bogie, north-west of Mackay.

Police have not confirmed a motive for the tragedy, after the gunman opened fire on four people about 9am on Thursday.

Two men and a woman died at the scene, while another man survived after fleeing into remote bushland with a gunshot wound to his stomach.

Police are speaking with five people in relation to a shooting at a rural property in Bogie near Collinsville this morning.https://t.co/0ictpbemAY pic.twitter.com/DQR1h1gPU6

The injured man staggered for several kilometres before raising the alarm.

He was airlifted to Mackay Base Hospital, where he remains in a serious but stable condition.

Detectives have not yet spoken with the man, police said on Thursday evening.

“All people involved are known to each other and investigations are continuing,” Queensland Police said in a statement.

Several crime scenes have been established at the property and forensic teams will continue searches on Friday morning.

Police said there is no ongoing danger to the public, after locals were urged to avoid the area earlier on Thursday.

“We are actively searching the area and committing our investigations as to what the circumstances were and how tactically people have been shot,” Mackay District Superintendent Tom Armitt told reporters.

“We do not know who was responsible. We haven’t been able to get any other details from the male person who had been shot, as he required emergency transport back to the hospital and he’s currently undergoing emergency surgery.”

Superintendent Armitt said the man was found in an “extremely critical situation” and had been unable to identify the shooter to police.

Police had to clear the property and ensure the area was safe before the bodies could be retrieved.

“We believe that the person who shot them may still be in the area … We haven’t been able to get close enough at the present time to confirm anyone’s identity.”

Five people were taken off the remote property and are assisting police to establish the events surrounding the shooting.

An emergency declaration was made at 11.30am, with boundaries encompassing Sutherland Road, Normanby Road, Mount Compton Road and Starvation Creek.

Police later updated the declaration to include Shannonvale Road, where the shooting took place.

Superintendent Armitt described the incident as a “very rare event” and said police would remain on the scene for as long as it took to track down the gunman.

“To my knowledge, nothing like this has ever happened in the Whitsunday region before,” Cr Clifford said.

“We are all deeply saddened by the tragedy.”

Cr Clifford said the incident was bound to have a big effect on the tiny community of Bogie, which has a population of 207 according to the latest Census data.

“It’s a little village. Everyone will know everyone … It’s just awful.”

One woman working in nearby Collinsville said the entire community was in shock.

“The whole town is a bit rattled that something like that could happen here,” she told AAP.

“It’s a small town. Everyone knows everyone.”

An employee at the local petrol station admitted being scared to work the night shift as the gunman continued to evade authorities.

“We heard something was going on, but three people killed? That’s scary – it’s not that far away.”