Kanye West locked out of social media over ‘disturbing’ posts

‘It was an abortion’: Chrissy Teigen reveals how she realised truth of ‘miscarriage’ 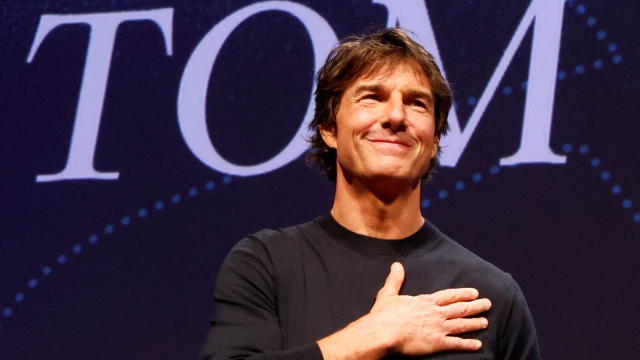 In the history of making movies, there has never been an actor on the planet with the contacts, resources and mega-budget to film scenes for a movie blockbuster in space. Until now.

The most tenacious maverick in Hollywood, Tom Cruise, is on the verge of becoming the first civilian to blast into space in a rocket, do a tethered spacewalk outside NASA’s International Space Station (ISS), and film the whole thing.

Professor of Film and Television at Deakin University, Sean Redmond, and editor of the 2021 book Starring Tom Cruise, describes Cruise as “superhuman”.

“There is both futurism in Cruise and nostalgia for the past,” Professor Redmond said.

“There are few if any contemporary stars who are both old and new Hollywood. He is the action hero of a Golden Age and yet somehow tomorrow’s star, as Top Gun has shown.

“Cruise returns us to an analogue age, where stars did put their physical bodies on the line. We know that Cruise has mastered that skill – there he will be floating in space. Wow.”

“[The movie] actually takes place on Earth, and then the character needs to go up to space to save the day”.

The whole idea gained traction in 2020, when it was announced SpaceX’s Crew Dragon planned to fly Cruise to the ISS, where Axiom Space and Space Entertainment Enterprise will install new ISS modules, according to IMDb.

The deal included a space station movie studio to open in December 2024, and a two-minute promotional video was put together.

Fast forward to this week.

In an interview with the BBC, chairman Ms Langley released more details about Cruise’s space venture, saying the Top Gun star planned to fly and film outside the International Space Station for the film – which reportedly has a budget of $US200 million ($319 million).

“Tom Cruise is taking us to space. He’s taking the world to space. That’s the plan,” Ms Langley said.

Thanks to Soviet cosmonaut Yuri Gagarin in 1961 who became the first man to travel into space, then Neil Armstrong and Edwin “Buzz” Aldrin in 1969 among 12 humans to walk on the Moon, the idea of a Hollywood actor inside a moon rocket was born.

Musicians like David Bowie (Space Oddity, 1972), and all the big and small film and television studios around the world have rolled out hundreds of sci-fi thrillers and space odysseys, iconic TV series and songs galore.

They’ve all been produced in movie, sound studios and locations on Earth.

Some might ask why Hollywood royalty like Tom Hanks (Apollo 13), Matthew McConaughey (Interstellar) or Sandra Bullock (Gravity) aren’t involved in a project where they would film a scene or two beyond infinity? Or do their own stunts?

“It allows the viewer to go ‘wow’ when they watch these delicious moments of awe-inspiring sequences.

“Going to space also works to elevate his star status, it enables Cruise to be future tense, of the future, an immortal star who simply does not age, like he is, almost paradoxically, not human but superhuman.”

Professor Redmond said Cruise going to space also ties in with him being Peter Pan, “allowing Cruise/Pan to be seen as ever-youthful, who can fly right into and out of people’s dreams”.

“Contemporary audiences are washed in special effects, are custom to virtual production where everything and anything can be filmed … there is a plasticity to modern films which, while exhilarating, lessens the risk factor, removes the human from the virtual worlds that are endlessly created.”

He and his co-stars used sporting IMAX-grade cameras to film the cockpit flying scenes.

That could well be the cinematography employed 420 kilometres up high.

Top Gun, with a budget of $170 million ($270 million), became the third highest-grossing film of all time in Australia since its May release and has earned more than $US1.4 billion ($2.2 billion) at the global box office.

Earlier this year, we saw Cruise’s ambitious stunt work on his 60th birthday in July, when the Mission: Impossible director Christopher McQuarrie shared a rare photo of one of the actor’s death-defying acts.

Cruise could be seen outside the cockpit of a red World War I biplane, dangling off the wing as the plane does a nose-dive and barrel roll.

“He is an interesting star … his ability to maintain his involvement in action-thrillers is probably a rarity (the only possible equal in terms of age of star and thriller films of the last decade or so might be Liam Neeson).

“He has shown an obsession with completing his ‘stunts’ which are often in dangerous or, at minimum, risky situations,” Professor Marshall said.

“There is a now a structure of film promotion that shows these have been done by him in films as a way to draw further attention to their ‘reality’ – and the achievement by Cruise.”

The post Ground control to Major Tom! Hollywood’s most tenacious actor on the verge of movie history appeared first on The New Daily.