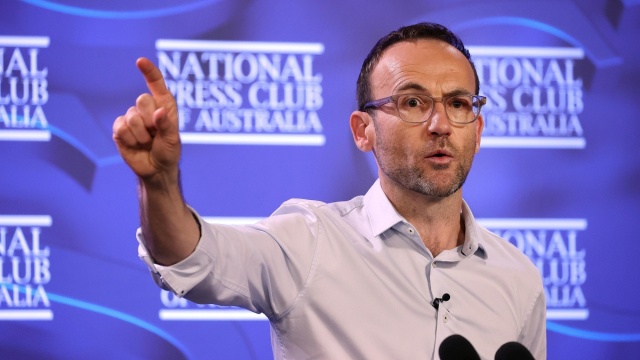 The Greens will vote for the government’s signature emissions reduction target of 43 per cent by 2030, the party’s leader, Adam Bandt, has announced.

In an address to the National Press Club in Canberra on Wednesday, Mr Bandt confirmed that – following extended deliberations – the expanded Greens party room had decided to back the bill, expected to be voted on this week.

The revelation all but confirms the passage of the most contentious aspect of the Albanese government’s legislative agenda for the first fortnight of Parliament, the fate of which will now be determined by Senate kingmaker David Pocock.

But Mr Bandt said the Greens would continue to seek a more radical approach to emissions reduction beyond the legislated target through the remainder of the coming term of Parliament, to address what he called an “untenable” and weak government position.

“This is round one,” Mr Bandt said. “Over the next six months, the battle will be fought on a number of fronts.

“We are bitterly disappointed that Labor has made it so clear over the last few weeks that they want to continue to open new coal and gas projects.

“With the talk of clean coal and budget cuts, the new government is already sounding far too much like the old government.

“We are not a rubber stamp.”

The Greens support, and that of one other senator, is needed for the bill to pass into law through the Senate. Senator Pocock has already indicated his likely support.

The Greens had lobbied Labor to ensure its 43 per cent emissions reduction target by decade’s end was a ceiling not a floor and for an end to Labor policy of allowing new coal and gas exploration projects to go ahead.

Mr Bandt said the Greens had secured concessions to Labor’s climate change bill, saying it had been “improved with a genuine floor, which means the target cannot go backwards”.

The fight for further concessions would now shift to the October review of the federal budget, Mr Bandt said, where the Greens will seek to hobble benefits given to fossil fuel extractors.

“We will comb the entire budget for any public money for any subsidies, handouts or concessions going to coal and gas corporations and amend the budget,” he said.

The blocking of the Rudd government’s Carbon Pollution Reduction Scheme by the Greens brought the party in for heavy criticism from some on the political left, who accused it of hamstringing climate action.

Mr Bandt said the May federal election, after which the Greens party room swelled by 60 per cent, had reaffirmed his commitment to the climate fight.

“We’re not just taking on different political parties; we’re taking on coal and gas corporations that are some of the biggest corporations in the world,” he said.

“The big corporations are taking this country for a ride and everyone else is paying for it.”

Earlier this week Opposition Leader Peter Dutton announced a softening, of sorts, of the Coalition’s 2030 emissions reduction target from the 26 per cent Abbott government target it took to the May election.

Mr Dutton told a Coalition party room meeting on Tuesday that a review into the potential use of nuclear energy, led by shadow energy minister Ted O’Brien, would be part of its final climate policy resolution.

“If we are serious about reducing emissions, while at the same time maintaining a strong economy and protecting our traditional industries, all technologies need to be on the table,” he told MPs.

Independent MP Allegra Spender has announced her intention to support Labor’s climate target legislation. Other crossbench MPs are tipped to follow suit in the lower house on Thursday.