One in five Australians unable to redeem airline flight vouchers

Australians snap up 'teaser' airfares in rush to travel 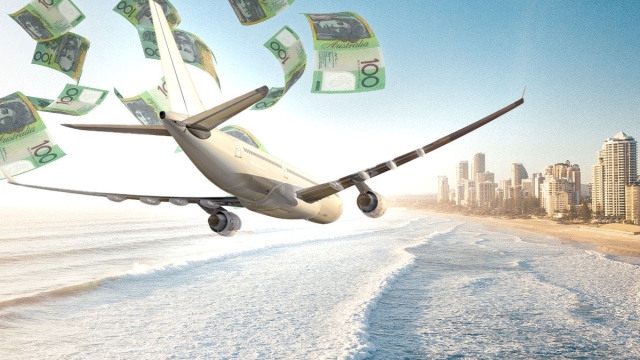 The heads of major Australian airlines Qantas and Virgin have admitted they will be hiking airfares to offset higher fuel costs.

Qantas CEO Alan Joyce told 2GB last week that while the airline’s business is “booming”, high fuel prices will next year cost Qantas an extra $1.8 billion more than the pre-pandemic bill – and fares will be priced accordingly.

News of rising airfares comes as passengers complain of hours-long queues and baggage-handling issues due to major staff shortages and surging traveller numbers.

Airfare prices rising, but no one knows by how much

Dr Webber said although airfare prices are rising, there is no data to show by how much.

“There’s data that’s supplied for the domestic market by the [Bureau of Infrastructure and Transport Research Economics], but it’s not accurate because it only analyses offer data.

“We’ll get a better idea when Qantas puts out its financial results in August. And until that time, we really don’t know.”

However, the CEOs of both airlines have already admitted to price hikes.

A Virgin Australia spokesperson told TND the airline’s airfares are still low, with domestic business-class fares up to 60 per cent “better value” than pre-pandemic.

But as with most other daily costs, inflation and global pressures are hitting airlines’ pockets – and there’s no sign as to when either will let up.

No end of price hikes in sight

Dr Webber said as long as oil and jet fuel prices are elevated, travellers will be paying more for airfares.

The Russia-Ukraine crisis means no one knows when the pressures on those prices will ease, he added.

In March, Mr Joyce said high oil prices could translate to a 7 per cent increase in airfares across Australia, with ticket prices likely to rise by 1 per cent for every $4 increase in oil prices.

“If you’re a low-cost, long-haul carrier, those type of cost pressures make it very, very difficult to stay in business,” he said.

“Given those high jet fuel prices, you’re going to see some airlines fall off their perch – and that means less competition.”

“In this post-COVID world, I think you’ll see airfares go up quite materially.”

School holidays are just around the corner, starting this week in states such as Victoria, and airlines and airports will be working hard to avoid a repeat of Easter’s chaotic scenes, when security queues extended outside the Sydney Airport building.

Sydney Airport and Melbourne Airport ramped up recruitment efforts in the lead up to the upcoming school holidays, but analysts told TND that it’s too late to make a difference.

Low staff levels and extra demand can leave airline baggage-handling slipping through the cracks, something for travellers to bear in mind before packing valuables in checked-in luggage during busier periods.

The Easter chaos saw many passengers lose their belongings as they made their way to holiday destinations.

Mr Joyce admitted Qantas lost 400,000 bags in May, placing the blame on passengers who had followed his advice to arrive at the airport two to three hours before their flight.

“Now, that resulted in people arriving and checking in the bags very early,” he said.

“The baggage system wasn’t designed to handle [that volume] and we had a flood of bags with nowhere to store them. So we lost a load.”

He said the airline had also made the “difficult decision” for flights to leave without bags over the Queen’s Birthday long weekend to avoid a knock-on effect after baggage belt systems at Sydney and Brisbane airports broke down.

The post Fuel costs drive airfare price hikes, with no end in sight appeared first on The New Daily.