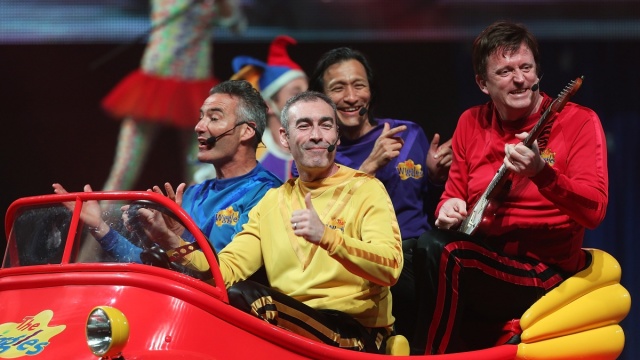 Adored by generations worldwide, iconic children’s group The Wiggles have made the first feature-length documentary on their 30-year journey in front of, and behind the camera.

Hot Potato: The Story of The Wiggles was one of six new Australian original productions to launch exclusively on Prime Video next year, and was showcased in Sydney on Tuesday night.

“With incredible archival footage … this documentary will give audiences a glimpse behind the curtain of The Wiggles phenomenon that they have never seen before, exploring their meteoric rise,” said Tyler Bern, Prime Video content boss for Australia, New Zealand and Canada.

They have a decent catalogue of documentaries and featurettes.

But, as founding member Anthony Field wrote on Facebook, this one will be the standout.

“[This] feature-length doco is an ode to childhood and a homage to the power of friendship and dreams, and features extraordinary, never-before seen personal archival footage,” he wrote.

“When we first formed The Wiggles more than three decades ago, our aim was to educate and inspire children through music, and that continues today.

“Looking through the archives has brought back so many incredible and emotional memories, from our first shows for 30 children to touring America and the world, playing to arenas.

“It has been such an incredible and evolving journey.”

From Cockroaches to cultural zeitgeist

The Wiggles came after the classic 1980s band The Cockroaches. Three brothers, Anthony, John and Paul Field started the group, to be later joined by Fatt.

They enjoyed enormous success; at one time they were labelled Australia’s hardest-working rock and roll band.

Anthony left the band and went back to university to study teaching and early childhood education where he met Cook and Page.

He then founded The Wiggles, brought in Fatt and classical music composer Phillip Wilcher. His brother Paul eventually returned to manage the band.

According to the Red Nose website, The Wiggles became part of their family and the band has been synonymous with fundraising for decades.

“The Wiggles have … played a major role in helping Red Nose raise awareness of our Safe Sleeping education campaign, which has been instrumental in reducing SIDS in Australia by an incredible 85 per cent, saving more than 10,000 lives,” the Red Nose website states.

The band’s name was inspired by the way children moved and danced, the members donned plain-coloured skivvies and their mission was simply to spread joy.

Which they have done, for more than three decades, to millions of kids around the world.

According to Prime: “Inspired by the colours of yellow, blue, red and purple, and engaging young children across the world in song and action was a novel approach to children’s entertainment in the early 1990s.

“The Wiggles’ mission of spreading joy endures and their songs are classics, having captured the truth of childhood – a place of wonder, novelty and delight.”

Hot Potato is directed by Sally Aitken, whose previous work includes David Stratton’s Stories of Australian Cinema, The Pacific: In the Wake of Captain Cook with Sam Neill, and Playing With Sharks: The Valerie Taylor Story.

Over the years, some of the original members began suffering health problems, including Fatt being fitted with a pacemaker in 2011, Anthony Field writing about his own struggles in 2012, and more recently Page suffering a heart attack on stage in 2020.

New members have joined the band as it introduced gender-balanced and diverse dancers and singers last year.

“It’s so important that The Wiggles continue to evolve along with our society,” Field said in a statement at the time.

“This is the first step towards shaping The Wiggles for the next 30 years.”

Ms Aitken said there was “a huge sense of responsibility to do justice to the story of Australia’s most iconic and successful band, and I have been stunned and deeply moved by many aspects of their story.

“I can’t wait to share this vision, knowing audiences of all ages will delight in this documentary, whether they know The Wiggles or not.”

Hot Potato: The Story of The Wiggles available exclusively on Prime Video in more than 240 countries and territories worldwide in 2023

The post From The Cockroaches to world stars: Doco reveals why The Wiggles are still hot potatoes appeared first on The New Daily.