'Our ballot box has been stuffed’: Fat Bear Week rocked by cheating scandal

Hurricane Ian leaves over 500,000 businesses and homes still without power

Your smartphone is still ruining the planet, but there may be a more sustainable solution

Con Edison renewable energy assets sold to German giant for $6.8B in one of biggest-ever green deals in U.S.

Biden rolls out a huge new wind farm program. The only catch—it kind of kills eagles

How much did climate change impact Hurricane Ian? A computer generated 20 different scenarios and calculated it exactly

Hurricane Ian eyes Tampa. If it stays on track, it will be the first direct hit in a century.

Florida braces for a big hit from Hurricane Ian this week

What botanical gardens can tell us about climate change

As spring descends on Queensland, so do large swarms of European bees

Scientists calculate how many ants live on earth and… yikes 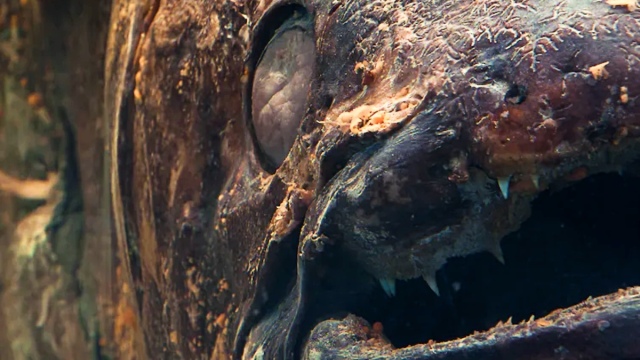 We see evolution all around us, in every living thing. Yet in the deep oceans, we find “living fossils” reminiscent of creatures from prehistoric times.

In his 1859 book On the Origin of Species, Charles Darwin coined the term “living fossil” to describe living organisms that appeared unchanged from their extinct fossil relatives.

The term has since been used to describe long-enduring lineages, relict populations, groups with low diversity, and groups with DNA that has hardly changed in millions of years.

The marine depths seem to be a good place for “living fossils”, with cartilaginous fish such as sharks and rays generally being two to four times more evolutionarily distinct than land animals.

In other words, while every species is unique, these species are particularly unlike their closest relatives.

Let’s take a look at some of these relics from the past.

Coelacanths are fish that live deep off the coasts of Africa and Indonesia.

They have unusually shaped paired body fins which they move alternatively, almost as if they’re “walking” underwater. Their lineage stretches back to the Devonian Period, at least 410 million years ago.

It was once thought coelacanths had gone extinct alongside (non-bird) dinosaurs about 70 million years ago, as they disappear from the fossil record around this time.

So imagine the surprise when a living specimen was dredged up from the deep ocean in 1938! This fish became known as “Old Fourlegs” and was thought to be the direct fishy ancestor of all land animals (although we now know this isn’t strictly correct).

Today there are two living coelacanth species, known as Latimeria, which have basically remained unchanged over the past 100 million years.

Horseshoe crabs first appeared at least 480 million years ago during the Ordovician Period and don’t appear to have changed much since.

They are not crabs at all, but “chelicerates” and therefore more closely related to spiders and sea scorpions.

They also have strange blue blood, due to a high copper content. Horseshoe crabs are harvested for their blood by the pharmaceutical industry since it has uses in biomedical testing.

Similar to horseshoe crabs, elephant shark (Callorhinchus milii) is a misnomer. This species, also known as the Australian ghost shark, is not a shark at all. It’s a related type of cartilaginous fish known as a “chimaera” and belongs to a subclass called Holocephali which diverged from the shark lineage more than 450 million years ago.

These “plownose” chimaeras take their name from their bizarrely shaped snout and can be found living off the continental shelves of Australia and New Zealand.

Analysis of their genome has shown the species changes at a veritable snail’s pace.

In fact, it has the slowest evolving genome of all vertebrates, with its DNA almost imperceptibly altered over hundreds of millions of years.

Nautilus are a type of marine cephalopod mollusc, and are therefore related to squid and octopus. However, unlike other cephalopods, they are housed within a distinctive smooth, hard shell.

Nautilus live in the open water in and around coral reefs in the Indo-Pacific Ocean. They’re hunted for their beautiful shells to make art and jewellery, but international trade is now regulated to protect them from exploitation.

Members of the Nautilidae family have existed from the Late Triassic, and appear relatively unchanged for more than 200 million years. Darwin described these creatures as “living fossils”.

The goblin shark (Mitsukurina owstoni) is a bizarre animal with a long, flat snout and toothy jaws that protrude in front of the face to catch unsuspecting prey.

It’s a relatively rare, deep-water shark living in all major oceans. With a face only a mother could love, it was described as “grotesque” when first encountered in 1910.

The goblin shark is the only living representative of its family, Mitsukurinidae, and is the most evolutionarily distinct shark we know of; its lineage stretches back some 125 million years.

Mantis shrimp, also called stomatopods, are found in tropical and subtropical coastal waters around the world.

They are fearsome marine carnivores known to deliver a dizzyingly fast and painful blow.

They also live a colourful life. During mating season they fluoresce (emit light) and have complex eyes to watch these displays. In fact, they have up to 16 colour receptors, whereas humans have just three.

The mantis shrimp lineage branched off from other crustaceans in the malacostraca class (such as crabs, lobsters and krill) during the Carboniferous, about 340 million years ago.

There are hundreds of species belonging to the suborder Unipeltata, which appeared some 190 million years ago.

Many cartilaginous fish tend to be highly evolutionarily distinct, but taking out the top spot is the striped panray (Zanobatus schoenleinii). This fish has a median “evolutionary distinctiveness” age of 188 million years.

Today, the striped panray lives in tropical waters in the eastern Atlantic (and possibly the Indian) Ocean, and feeds on small invertebrates from the ocean floor.

It belongs to the order Rhinopristiformes and is oviparous, meaning it gives birth to live young. It is listed as “vulnerable” by the International Union for Conservation of Nature.

Brachiopods are shelly marine animals with long, fleshy stalks that live in burrows on the sea floor.

They act as reef-building organisms, filter-feeding from the water around them. Brachiopods living today, such as Lingula, look more or less the same as their Cambrian counterparts from about 500 million years ago.

They are considered the oldest known animal (genus) that still contains living representatives.

In The Origin of Species, Darwin noted “some of the most ancient […] animals as […] Nautilus, Lingula, etc., do not differ much from living species”. It’s these observations that led him to propose the term “living fossil”.

Crinoids are known from at least the Devonian (359 to 419 million years ago) but may have existed as long ago as the Ordovician (more than 445 million years).

These marine animals, also known as “sea lilies”, once lived on the sea floor in a symbiotic relationship with corals. Corals grew off the stalks of crinoids to reach higher into the water column for better feeding opportunities.

This association was very common until the crinoids’ supposed extinction 273 million years ago. However, in 2021 these two marine creatures were rediscovered in Japanese waters, thriving in a blissful aquatic partnership.

It remains a mystery why no fossil evidence of this happy marriage had been found for the intervening period.

How do living fossils form?

Although animals described as “living fossils” usually do continue to evolve, many of these changes are imperceptible to the human eye.

To track how animals change over time, we look at molecular changes visible in the genes, or “morphological” changes to the physical form.

Internal (or molecular) drivers include genetic drift, which is the random change in the frequency of gene variants in a population over time.

External forces include natural selection, in particular sexual selection, which lead to specific traits being inherited in a population over time.

All the marine animals in this list seem to be undergoing morphological stasis (slowing or stoppage).

Some may have molecular stasis, too. Their slowing rates of evolution are likely a result of the relatively stable environment underwater, particularly in the deep sea.

These distant refuges are some of the least affected by direct human impacts and changes in weather and climate.

Then again, these animals are not immune. And if we’re not careful, we may lose some of these curious creatures forever.

Alice Clement, Research Associate in the College of Science and Engineering, Flinders University

The post From coelacanths to crinoids: These nine ‘living fossils’ haven’t changed in millions of years appeared first on The New Daily.