Farmer's warning after radical facial surgery saves him from melanoma

The kids are all right: Fewer COVID-19 vaccine side effects

Food and drinks are getting sweeter. Even if it’s not all sugar, it’s bad for our health

How much exercise is best? Double the recommended amount

The new Omicron sub-variant that has health authorities on alert

Private health insurance: The key points to consider when signing up

New hope for women with long-term pain from endometriosis

Commonwealth Seniors Health Card eligibility is changing. Here’s how to find out if you qualify

Fyfe steps aside after 'taxing' tenure 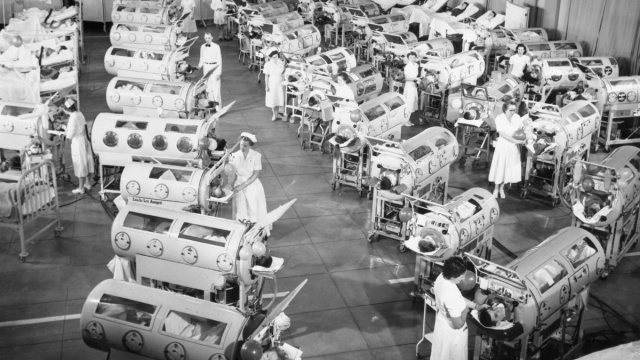 British health authorities are investigating a likely outbreak of polio, the first in nearly 40 years.

The UK Health Security Agency (UKHSA) is yet to directly identify cases of the devastating disease which mostly affects children under the age of five.

One in 200 infections causes irreversible paralysis, mainly in the legs.

But among those paralysed, 5-10 per cent die when their breathing muscles are immobilised.

The UKHSA said investigators are working “urgently” to establish if any community transmission is occurring.

How was the outbreak identified?

The investigation was launched after “several closely-related viruses were found in sewage samples taken between February and May”.

There are a number of polio viruses and they’re all highly contagious. They can be transmitted by respiratory droplets, but are mainly spread through contact with infected faeces that has contaminated food or water.

In this instance, the virus identified at London Beckton Sewage Treatment Works is a ‘vaccine-derived’ poliovirus type 2 (VDPV2).

The Centers for Disease Control and Prevention describe a vaccine-derived poliovirus (VDPV) as a live strain of the weakened poliovirus that was initially included in oral polio vaccine (OPV) and has changed over time to behave more like the wild or naturally occurring virus.

The UKHSA said the detection of a VDPV2 made it “likely there has been some spread between closely-linked individuals in North and East London and that they are now shedding the type 2 poliovirus strain in their faeces”.

Dr Vanessa Saliba, Consultant Epidemiologist at UKHSA said: “Vaccine-derived poliovirus is rare and the risk to the public overall is extremely low.”

But isn’t polio just about eradicated?

Except for Pakistan and Afghanistan, yes, polio has been eradicated. But there has been an emergence in Africa. And the vaccine that saved the world is somewhat to blame.

The original vaccine developed in 1955 by Jonas Salk was an inactivated (killed) polio vaccine (IPV) and given as a shot.

A more convenient and child-friendly oral vaccine was developed by Albert Sabin. It was particularly useful in developing countries because it didn’t need to be refrigerated. And there were no needles involved.

Sabin’s oral vaccine arrived in Australia in 1966 and was thereafter routinely given to children at school as a few drops of what tasted like lolly water.

The problem now is the Sabin vaccine virus has evolved into an entity that both causes and prevents the disease.

The shift away from the Sabin vaccine

“Most outbreaks of type 2 polio virus are caused by the vaccine. Then you have a problem where our best weapon is that same vaccine, so you’re kind of fighting fire with fire,” said Dr Adam Lauring, an associate professor in the University of Michigan’s department of microbiology & immunology.

In 2020, Dr Lauring and colleagues conducted a study that allowed them to view the evolution of the vaccine virus into a more dangerous form.

This is actually old news. The Western world has been transitioning away from Sabin’s live vaccine since the turn of the century. Australia switched from the oral vaccine to an inactivated polio vaccine in November 2005.

Children in poorer countries continue to be given Sabin’s lolly water, because of convenience. But it’s the weak link in the push to make the world polio free.

According to the UK Health Security Agency, as part of routine surveillance, it is “normal for one to three ‘vaccine-like’ polioviruses to be detected each year in UK sewage samples”.

However, these have “always been one-off findings that were not detected again”.

These previous detections occurred “when an individual vaccinated overseas with the live oral polio vaccine (OPV) returned or travelled to the UK and briefly shed traces of the vaccine-like poliovirus in their faeces”.

The last case of wild polio contracted in the UK was confirmed in 1984. The UK was declared polio-free in 2003.

Jane Clegg, chief nurse for the NHS in London, said “the majority of Londoners are fully protected against polio and won’t need to take any further action”.

However, the NHS is reaching out to parents of children aged under five in London who are not up to date with their polio vaccinations “to invite them to get protected”.

According to the World Health Organisation, vaccine coverage for  several diseases including polio, in London, is about 86.6 per cent.

In Australia, 94.9 per cent of people are vaccinated against polio.

Both countries have a shortfall. And both need to get it sorted.

The post First UK polio outbreak in 40 years: How it happened appeared first on The New Daily.