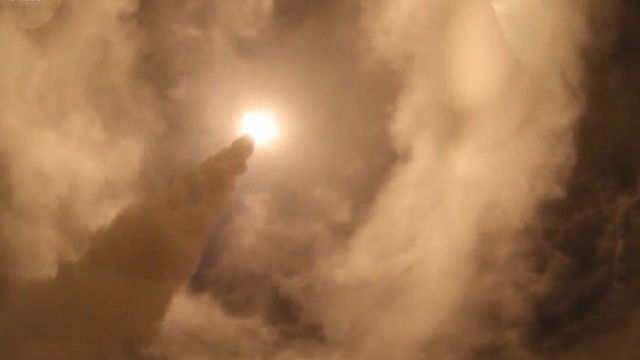 The company behind NASA’s first rocket launch in Australia for more than a quarter of a century plans to conduct more than 50 a year by 2024.

ELA will help launch two more rockets for the American space agency from the Arnhem Space Centre in July.

But the company’s plans this year pale in comparison to its aims by 2024 – by which point it hopes to launch more than one rocket a week.

An academic specialising in astrophysics told The New Daily the country was “entering a very cool era where commercialisation means that we can get more done”.

Accelerating at a speed of 500 metres per second, Sunday night’s rocket took just seconds to disappear out of view.

ELA scientists predicted it would take approximately 70 seconds to ascend to a sub-orbit 328 kilometres from Earth.

The rocket carried an X-ray quantum calorimeter, which will measure the gases coming from the Milky Way galaxy, with University of Wisconsin scientists hoping to learn more about the structure and evolution of the cosmos.

After hovering above Earth for about 15 minutes and collecting a range of images and data, the rocket descended back to Earth by parachute, landing south-west of the initial launch site.

NASA’s choice of Arnhem Land for its launch location may seem somewhat unlikely, but there are several reasons why it was selected.

Dr Sarah Webb, a postdoctorate research fellow at Swinburne University’s centre for Astrophysics and Supercomputing, told The New Daily that the Milky Way could not be seen from the US.

“In the southern hemisphere, we have access to being able to enter slightly different orbits, or patterns,” Dr Webb said.

“It’s just a patch of the sky that if you were in the USA, you literally can’t see because you’re just too far north. So lots of advantages here.”

“The airspace has to be completely clear. Not just the airspace, but also the satellite space above where you’re watching the rocket, you have to have gaps in time to that,” she said.

Another key advantage of the location was its proximity to the equator. Arnhem Space Centre is 12 degrees south of the equator.

“When you launch a rocket from Darwin, you get about 200 kilometres an hour faster velocity as you go up – just because you’re closer to the equator, you’re spinning faster,” she said.

NASA is ELA’s first customer, with the Northern Territory-based company signalling its intent to drastically expand their program in years to come.

Sunday night’s launch was one of three in this particular project, with the second rocket to take off from Arnhem Space Centre on July 4 and the third on July 12.

And the company expects to complete a mind-boggling 50 similar launches a year by 2024 and 2025.

“ELA really hopes this launch will showcase that Australia, and the Arnhem Space Centre, can provide access to space, and that this is just the beginning for the Australian space industry,” he said.

To add to the astonishing figures, another Australian company has also signalled its intent to complete dozens of launches a year.

Southern Launch, located in South Australia, was given the official go-ahead to launch rockets earlier this year, with its chief executive Lloyd Damp expressing intent to eventually execute 36 launches a year.

Dr Webb said she expects Australia will continue to play a key part in space exploration.

“We’re entering a very cool era where commercialisation means that we can get more done,” she said.

“I think it’s a huge achievement that we’ve been able to basically facilitate a launch by NASA.

“Now that we have a tried-and-tested launch from NASA, I think it’s a fantastic way to say that this is open for commercial business, and we are able to meet the needs of those wanting to watch rockets.”

“The launching of a rocket from Arnhem Land is an incredible milestone for Australia in establishing the Northern Territory as a launch site and an important player in space exploration,” she said.

“Working with the Gumatj people in launching the rockets into space combines one of the oldest cultures in the world with some of the most advanced technology ever.”

Mr Jones said the data from the ongoing series of launches will be reviewed by the team from universities of Colorado and Wisconsin, with preliminary results hopefully available in coming weeks.