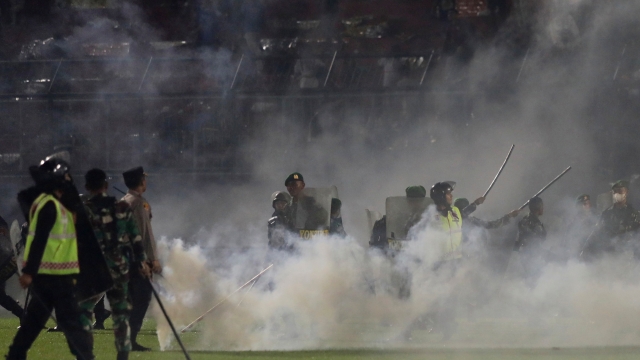 The Indonesian Football Association (PSSI) and world soccer governing body FIFA will form a joint taskforce in a bid to improve crowd control and safety measures after a deadly soccer stampede earlier this month.

Indonesian authorities are under pressure to take swift steps to overhaul safety standards after more than 130 people died during a crowd crush at a match at the Kanjuruhan stadium in East Java on October 1, in one of the world’s worst stadium disasters.

Security experts have said the firing of tear gas by police inside the stadium, a measure prohibited by FIFA, triggered the fatal stampede.

“We agreed to form a taskforce … consisting of the government, FIFA, and experts in soccer, security, and stadiums,” PSSI head Mochamad Iriawan told reporters on Thursday after a meeting with FIFA officials.

Under the plans, Indonesian police would ensure their standard operating procedures were synchronised with FIFA regulations, he said.

The joint taskforce will also include members of the Asian Football Confederation as well as the police and the ministries of sport, home affairs, health and public works.

The nation’s President Joko Widodo, popularly known as Jokowi, has said FIFA did not plan to sanction his country over the incident but the rare intervention by the sport’s governing body comes with Indonesia due to host the under-20 World Cup next year.

FIFA President Gianni Infantino is expected to visit Jakarta on Tuesday to meet with Jokowi, after which a joint commitment will be announced.

Infantino will also make a statement during a summit of leaders of the Group of 20 major economies in Bali in November about Indonesia’s readiness to host an international event, Iriawan said.

Six people including police and match organisers are facing criminal charges after the stampede, with the government highlighting lax safety measures including locked exit doors and an over-capacity stadium, as contributing factors.

The Indonesian minister of public works said the Kanjuruhan stadium would be completely renovated after an audit of the site.