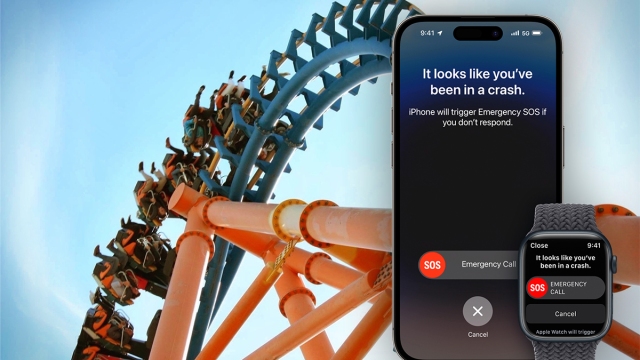 Smartphones and rollercoasters are rarely a good pairing but even less so now, thanks to a new iPhone security feature.

Last month, Apple rolled out crash detection – a feature that alerts emergency services when data sensors pick up motion that may indicate a car crash.

Although the feature has the potential to save lives, it seems this new update is doing its nominated work and then some.

Since its launch last month, there have been several false alerts to emergency services across the US, triggered by the crash detection feature.

According to a report by The Wall Street Journal, a Cincinnati woman unknowingly alerted authorities when she carried her newly purchased iPhone 14 with her on a rollercoaster.

Mistaking the sudden movements of an exhilarating rollercoaster ride for a car accident, crash detection called 911.

Sara White, a dispatcher was on the other end of the call with an automated voice explaining that the owner of the device had been involved in “a severe car crash” and “is not responding to their phone”.

In the background, dispatchers could hear sounds from the scene of the “accident”.

The automated message was followed by the longitude and latitude bearings of Ms White’s location. The message then repeated.

Responders arrived at the amusement park, expecting an emergency, but found nothing out of the ordinary.

This unexpected outcome was not an isolated one.

There have been at least six similar phone calls from visitors at the same amusement park since the release of the new iPhone last month, according to the WSJ.

When the crash detection sensors detect a potential collision, the iPhone or Apple watch will sound an alarm and display an alert on the device which reads, “It looks like you’ve been in a crash.”

Below the message is an emergency call slider prompting the user to call for help.

Users can dismiss the alert, however, if they are unable to respond, the call to emergency services will automatically be made following a 20-second delay.

Crash detection is automatically turned on for eligible iPhones and Apple Watch models, but users are not tied to this feature.

It can be disabled through the settings app on both the iPhones and Apple watches.

Alternatively, as the emergency feature requires a cellular connection or wi-fi calling with an internet connection, users can switch on aeroplane mode if they are engaging in activities which may trigger the alert.