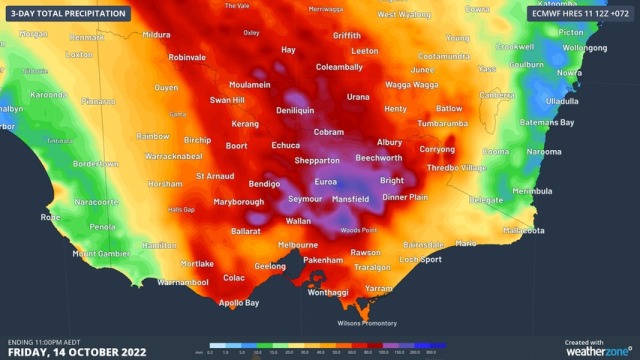 Rainfall has started to increase over parts of Victoria, as the state prepares for downpours expected to bring record totals and dangerous floods.

People in Tasmania have also been urged to prepare for widespread heavy rain and potentially dangerous and life-threatening flash flooding, while parts of NSW can also expect deluges.

Rain is expected to increase as a cold front moves over Victoria’s western districts, spreading further east on Thursday.

Regional communities have been warned to prepare to be isolated for up to three days as the worst of the weather hits. In Victoria’s high country, Bogong Village was evacuated on Wednesday as a landslide cut the Bogong-High Plains Road.

The Bureau of Meteorology issued a severe weather warning for heavy rainfall on Thursday, covering most of Victoria.

Weatherzone said the heaviest rain would contract to the state’s north-east on Thursday night before clearing on Friday morning. In the mean time, it is expected to deliver 100-200 millimetres of rain to parts of the state that are already drenched after months of wet weather.

“Heavy rain will also soak parts of Tasmania and southern NSW during the next 48 hours, likely causing or exacerbating existing flooding in both states,” the forecaster said.

Emergency services have been deployed to multiple regions in Victoria, including Wimmera in the west, and along the Avoca, Loddon and Campaspe rivers. Sandbags are also available at multiple sites across the state.

“You need to make sure that you are prepared for up to 72 hours of potential isolation,” Mr Stephenson said on Tuesday.

“We know that our catchments are full, we know that we’ve had record rainfall to this point, and the ground is absolutely sodden,” he said.

He also repeated warnings for motorists not to drive through floodwater – a warning repeated in NSW after the body of a man was found in his submerged car in the state’s central west on Tuesday.

The Bureau of Meteorology has also issued severe weather warnings for northern Tasmania and southern NSW.

In NSW, the Murrumbidgee River is one of those of most concern, with moderate flooding expected at Wagga Wagga on Wednesday night. The weather bureau has forecast up to 50 millimetres of rain for some parts of NSW.

“The additional rainfall this week will further exacerbate the flooding situation across southern NSW and Victoria, with the prime focus shifting to Victoria, northern Tasmania and southern NSW,” it said.

“Landslips are possible given sodden soils, and the expectation of further rain.”

In Tasmania, the warnings cover the north and central regions, and the east coast, which is tipped to be hit by dangerous winds.

Heavy rain is expected from Wednesday evening to Friday, with the north expected to cop the worst, including intense local falls.

BOM said 24-hour rain totals in Tasmania on Thursday were expected to reach 60-120 millimetres, with isolated totals of up to 180 millimetres on higher terrain.

Potentially dangerous and life-threatening flash flooding, with 100 millimetres falling within six hours, is possible in the Great Western Tiers.

“Widespread significant flooding is expected from Thursday and into the weekend,” BOM said.

“Major flooding is possible in parts of the Forth, North Esk, Mersey, lower Macquarie and Meander rivers and the river Ouse (in the Derwent catchment).”

The Tasmanian SES said widespread minor or moderate flooding was likely from Thursday and major flooding was possible at some locations.

“People are encouraged to be aware of the forecast and prepare their property before the rain arrives,” acting director Leon Smith said.

“This means knowing your flood risk and understanding whether your property is prone to flooding.

“With the ground being saturated in many areas of Tasmania, rivers will rise quickly over coming days.”

Mr Smith said the crisis looming for Tasmania appeared likely to be similar to flooding it last endured in 2016 – in which three people died.

The post Evacuations, sandbags ‘a taste of what’s to come’ as rain begins appeared first on The New Daily.