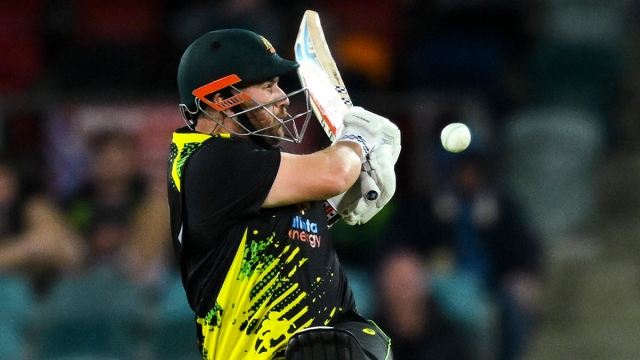 A powerful 82 from Dawid Malan and all-round class with the ball have helped England clinch its T20 series against Australia with a second consecutive win by eight runs.

Sent in to bat, the visitors fought back from early trouble to post 7-178 and were generally in control when defending it, keeping their foes to 6-170 in game two in Canberra on Wednesday night.

Australia had rallied well and was still in the game when needing 34 runs off the last three overs, before Sam Curran capped a stunning night with the ball by knocking over the red-hot Tim David (40 off 23 balls).

The hosts even threatened an absurd last-over comeback when Pat Cummins hoisted Curran for a six off the first ball, but he and Matthew Wade couldn’t find any more boundaries.

It was the two-card trick!

The teams meet again in Canberra on Friday.

But the loss has highlighted fragility in the Australian batting card, particularly at the top of the order where captain Aaron Finch (13 off 13 balls) and David Warner (four off 11) again failed to fire.

The duo could barely keep the scoreboard ticking and left their team 2-22 in the fifth over when both were dismissed, their teammates unable to pull off the rescue mission.

Mitch Marsh and Marcus Stoinis added 40 runs together and the former pushed on to make a team-high 45, but they could never wrangle the ascendancy.

David continued to impress early in his Australian T20 tenure, smacking five fours and a six in his innings.

Dawid Malan is Player of the Match for his 82 off 49 balls #AUSvENG pic.twitter.com/XyDFu65c60

Marsh looked poised to reprise his heroics from last year’s T20 World Cup final in cruising to 45 off 29 balls, but picked out a fielder off Curran’s bowling.

It was just one memorable moment from an impressive night for Curran, clearly the best bowler of the match in picking up 3-25 from his four overs.

Earlier, England had looked in trouble at 4-54 before Dawid Malan and Moeen Ali combined brilliantly to put on a 92-run partnership.

Malan was in dominant touch and found four sixes in his powerful 82, while Ali played his role well to score 44 from 27 balls.

Despite gun bowling quartet Cummins, Mitchell Starc, Josh Hazelwood and Adam Zampa returning to the Australian side, it was all-rounder Stoinis who led the attack with 3-34.

Australia picked its first-choice bowling attack as they ready themselves for their T20 World Cup title defence, with X-factor Glenn Maxwell also recalled to the side.

Steve Smith was again not picked, the former Test captain seemingly cemented as not a part of the first-choice team.

The post England seals T20 series with eight-run win over Australia in Canberra appeared first on The New Daily.