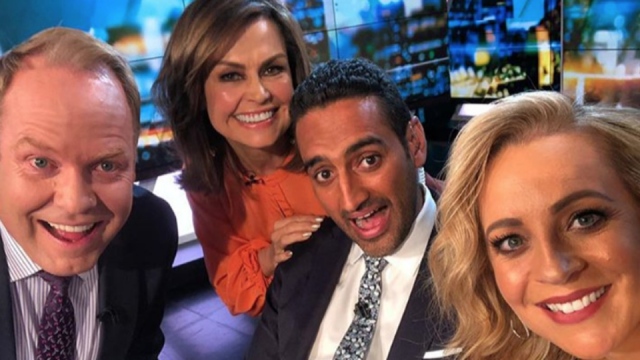 When co-host Carrie Bickmore dropped a bombshell that she was leaving Ten Network’s The Project after 13 years, speculation as to what she was going to do next made headlines within hours.

Sitting alongside Peter Helliar and regular hosts Hamish McDonald and Kate Langbroek on Tuesday night, an emotional Bickmore said the show had been “so much in my DNA … I don’t know who I am without it”.

“I’m going to move onto something different … I do not know what that is yet.”

What we do know is the 2015 Gold Logie winner wasn’t fired.

When Bickmore opened her FOX FM radio show with friend and comedian Tommy Little on Wednesday afternoon, he jokingly asked: “Did you get fired?”

A chuckling Bickmore responded: “You know I didn’t. You know it was my decision and you know I’d wrestled with it for a very long time.”

“I didn’t ever want to be tapped on the shoulder and told ‘your time is up’ on the show I’ve been on from the beginning and that I love dearly.

“It’s been a huge part of my life … and with any big decisions you make in life there is always an element of doubt.

“My gut is telling me that it’s the right time.

“I need a new adventure.”

What that might be is anyone’s guess, but industry insiders and social media were quick to speculate about a move across to the Nine Network to join the Today breakfast show.

On September 5, A Current Affair host Tracy Grimshaw surprised fans with a similar on-air announcement that she was standing down after 17 years. That was thought to have paved the way for Karl Stefanovic’s current co-host, Ally Langdon, to slide into the chair.

That would mean a move to Sydney for Bickmore, but as one TV fan commented on TVBlackbox: “As Tom Gleeson once said, ‘Channel Nine has run out of stars so they’re probably keen to sign her.

“I just can’t visualise Carrie’s face on those sneering ACA promos. The Today show would be a better fit but a huge gamble.

“Breakfast radio is my guess – big money and fairly cushy,” the fan suggested.

“Whatever happens, it will be a very different TV landscape in 2023,” one executive told The Daily Telegraph.

“Nine needs to do something with Today as ratings can’t continue as they have. It is crunch time.

“Carrie is very well liked. The question really is whether she would take the job.”

“I’m tipping Lisa [Wilkinson] won’t be there next year, so it’s quite a seismic shift.’

Who takes over from Bickmore?

Bickmore, 41, started on the network as the newsreader with Rove McManus on Rove Live, and was the only original host left on The Project, with Charlie Pickering and Dave Hughes having moved on.

Bickmore was awarded the Medal of the Order of Australia in 2019 for her services to broadcasting and to brain cancer awareness.

Her first husband, Greg Lange, died from the illness in December 2010, three years after their son Ollie was born.

She launched Carrie’s Beanies 4 Brain Cancer Foundation – symbolic of Mr Lange wanting to cover up his scars with a beanie – in 2015. As of September it had raised more than $18 million for brain cancer research.

Bickmore has since had two daughters, Evie, 7, and Adelaide, 3, with partner Chris Walker.

Earlier this year, the couple took their family off to Europe for three months, with Chrissie Swan filling in.

So who will take her spot?

Both Swan and another Project regular Georgie Tunny have been well received as the show continues to struggle for ratings in the 6.30pm-7.30pm time slot.

Swan, however, has a full-time breakfast radio show on NOVA FM.

Tunny, a former ABC Breakfast News presenter and producer, joined the show full-time in August and has increasingly spent more time on the desk.

There’s also journalist Jan Fran, who is a guest on the Sunday night version of the show.

Wilkinson is back hosting on Fridays and Sundays after taking a break after her infamous Logies speech.

The Sydney Morning Herald says Wilkinson “remains an asset for Ten and a tested prospect at the desk”.

Meanwhile, Bickmore plans to spend quality time with her family, do more school pickups and drop-offs, watch her kids play Saturday sport, and be around for the milestones (she’s previously mentioned she missed Adelaide’s first steps).

It’s reported she is likely to take the summer off before making any announcements about her next TV gig.

“The show has become a second home to me and I couldn’t be more thankful to everyone involved in it. I started the show when [son] Ollie was one and he is now 15, which is crazy.

“I look forward to more family dinners and watching the show with my PJs on and a wine in hand.

‘‘For now I will enjoy every show I have left until the end of the year. I just want to say thank you. It has been an incredible privilege.”

A source said Bickmore’s replacement will be announced after she leaves The Project on November 30.

The post End of an era for Ten’s <i>The Project </i> as Carrie Bickmore prepares for her next move appeared first on The New Daily.