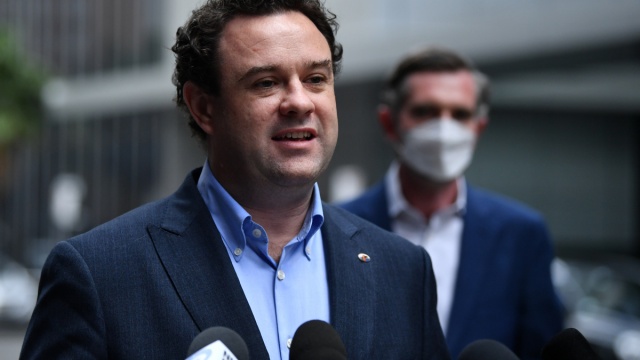 Under-fire NSW Trade Minister Stuart Ayres says he should have told his former colleague John Barilaro not to apply for a US job that has engulfed the state government in crisis.

Premier Dominic Perrottet is under mounting pressure to sack his deputy Liberal leader to stem the fallout from the seven-week scandal over how Mr Barilaro landed the $500,000-a-year trade role he created when he was a minister.

The release of a trove of government documents to a parliamentary committee probing the controversial appointment has raised serious questions over the recruitment process.

Several Coalition ministers have declined to publicly support Mr Ayres and on Tuesday he admitted one colleague had asked him to quit, although Mr Perrottet had not.

Mr Perrottet has said he will wait until a Department of Premier and Cabinet review into the former deputy premier’s appointment delivers its findings before taking any action.

Mr Ayres said he had done nothing wrong but agreed his position would not be tenable if the review found otherwise.

He denied that he had misled parliament in June when he said the first recruitment round for the US trade envoy job had failed to identify a successful candidate, despite him signing a briefing note saying senior public servant Jenny West had been selected.

He also denied asking Investment NSW to add Mr Barilaro’s name to a shortlist of candidates being considered by the selection panel.

One of the documents revealed Investment NSW CEO Amy Brown noted in February that Mr Ayres wanted to add another name – which was redacted from the publicly released version – to the shortlist, leading to speculation it was Mr Barilaro.

He insisted the appointment was made by the public service without political interference but conceded he had one regret – he should have anticipated the political damage Mr Barilaro’s appointment would create for the government.

“I would love to be able to go back and say to him ‘you probably shouldn’t do this’ but it still would have been his call,” he said.

Labor said the latest files – which indicated Mr Barilaro was not initially considered the best candidate before his assessment was upgraded and those of his main rivals downgraded – put pressure on Mr Ayres to explain what had occurred.

The opposition previously said the government’s “fingerprints” were all over the appointment and accused it of misleading parliament over the affair.

More documents relating to the issue would be released on Tuesday, Labor said.

On Wednesday, Ms Brown will give evidence to the upper house inquiry for a second time, while Mr Barilaro will testify next week.

Mr Barilaro relinquished the high-profile appointment in June, less than two weeks after it was announced, saying the position had become untenable.

The post Embattled Ayres admits one regret on Barilaro job appeared first on The New Daily.