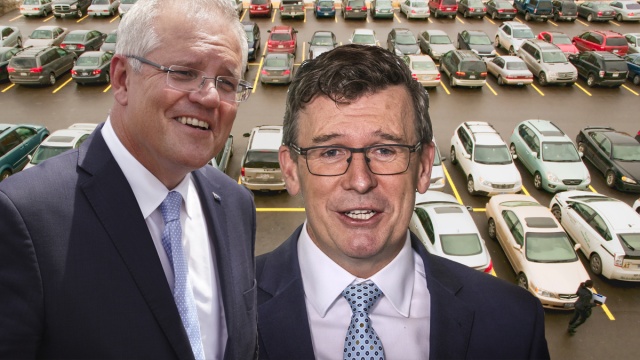 Mark Dreyfus and team have quietly slipped a bazooka into the National Anti-Corruption Commission’s tool kit: the NACC can come after  politicians’ ethics. The pork is cooked.

Since the Attorney-General unveiled the NACC legislation, the shouting and headlines have been (rather needlessly) about the issue of public hearings, or “kangaroo courts”, as some members of the Coalition used to call them.

More interesting is a single phrase tucked away in one line of the Act that should spell the end of the corruption euphemistically referred to as “pork barrelling” – the multi-billion-dollar rorting that symbolised the Morrison government and all who oinked in it.

The utterly cynical “they all do it” excuse (trotted out by Liberal and National Party members as the stench rose around them) will no longer cut it.

Ditto Simon Birmingham’s infamous “it’s what electorates expect” line, because the NACC will be empowered to judge the ethical dimension of politicians’ actions, not the purely legal aspects of guidelines and legislation that, in some cases, were specifically drafted to make corruption legal and allow the unethical use of taxpayers’ funds for party political ends.

There is no more obvious example than the biggest rort of them all, the Community Development Grants concocted by the Abbott government and repeatedly exposed on these pages as it was being used by government members to shamelessly “pork barrel” their electorates.

And remember the NACC has retrospective powers. I’m wondering if several senior Coalition members will be happy to support the legislation when they realise the NACC will quite easily be able to officially declare them corrupt – and the spat over public versus private hearings will be irrelevant.

The seemingly innocuous but powerful phrase is in the last line in 8.13 of the Act:

To avoid doubt, conduct engaged in as part of a political activity does not constitute corrupt conduct if the conduct does not involve or affect either of the following:

(a)  the exercise of a power, or the performance of a function or duty, by a public official;

(b)  the use of public resources (within the meaning of the PGPA Act).

Cutting through the double negative in the first bit, it means political activity can constitute corrupt conduct if it involves the use of public resources “within the meaning of the PGPA Act”.

Not many people will be au fait with the PGPA Act. I certainly wasn’t.
Fortunately Howard Whitton is.

Mr Whitton was a co-author of the Labor shadow ministry code of conduct commissioned by Senator John Faulkner in 1998, subsequently an ethics adviser to various US agencies and the OECD and a founding director of the Ethicos Group of integrity consultants. He previously provided valuable insight for our coverage of the $660 million #carpork scandal.

“The tie to the strictures of the PGPA Act 2013 is especially significant, and rather neat, with its specific reference to the ‘proper’ use of public resources,” he has written by way of explanation.

“‘Proper’, when used in relation to the use or management of public resources, “means efficient, effective, economical and ethical. (my emphasis)

“The terms ‘efficient, effective, economical’ are available to call up expert advice and evidence supporting or rejecting a specific grant (from the relevant department or agency, or an expert Commission), as was not done in Sports Rorts or any grant decided in the PMO, etc).

“’Ethical’ opens a range of possible bases for judgment, including the Ministerial Standards.”

A government and minister might be able to fudge whether a grant uses public money efficiently, effectively and economically, but judging the ethics of the rorting will be beyond their control when in the hands of the independent NACC.

With the help of spreadsheet sleuth Vince O’Grady and other researchers, we have been detailing the unethical abuse of multiple schemes and grants ever since the Morrison/McKenzie #sportsrorts hit the fan in 2020.

The post-mortem on the Morrison government’s unprecedented corrupt use of public funds will be lengthy, a genuinely line-by-line accounting from the petty to the monumental.

It will serve as a warning to future governments and, we trust, a ruling off of a low ebb in Australian politics.

At least at the federal level, no minister will be able to say, as then NSW premier Gladys Berejiklian effectively did when caught with her fingers in the shredder over $252 million of politicised council grants: “Yeah, it’s crook, you might not like it, but that’s the way it is, so too bad.”

The post Dreyfus puts a fork into pork rorts, for all time, with a few choice words in NACC legislation appeared first on The New Daily.