Consumers drive the economy by spending savings, but inflation is set to hit hard

Is education or immigration the answer to our skills shortage? We asked 50 economists

‘It’s important not to over-react’: Australia’s top economists on how to fix high inflation

‘Not a pretty scenario’: Wages set to rise in 2022, but inflation could steal workers’ gains

Soaring job ads: The industries hiring the most workers in Australia

Jobs recovery begins as workers look to higher wages. But there's a catch 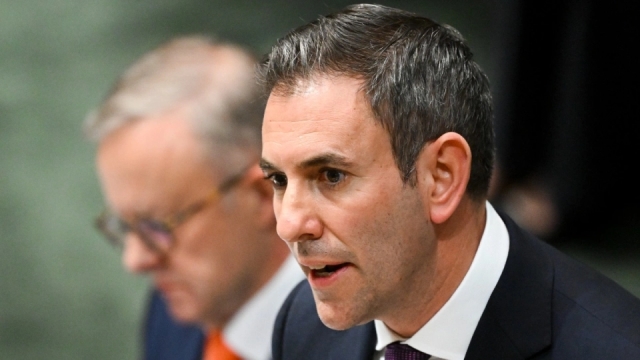 The federal government is awash with $114 billion in new revenue, but Australians hoping the windfall will be spent on additional relief from the cost-of-living crisis are going to be disappointed.

Households are suffering under soaring grocery bills and spikes of up to $520 in annual energy bills as inflation hurtles towards a 30-year high.

But Treasurer Jim Chalmers is preparing voters for tough decisions when he hands down his first budget on October 25, warning on Tuesday that a “probable” global downturn meant higher unemployment at home.

He said the budget won’t be “spraying cash” around on inflation relief with fears new cost-of-living handouts – similar to the $16.4 billion dished out in the pre-election March budget – would just make prices rise faster.

“We need to be extremely cautious here that any cost-of-living support that we provide isn’t counter-productive,” Dr Chalmers said.

Instead, Labor is selling its first budget as a no flash or frills affair, with a focus on election promises like childcare subsidies and skill reform over energy bill relief or a broadly acknowledged need to overhaul taxation.

It is hoped these efforts will deliver bill relief while also, over the medium term, helping to lower inflation by alleviating massive labour shortages.

But while Labor finalises this “bread and butter” budget, figures by Deloitte Access Economics on Tuesday night estimated Dr Chalmers would unveil a massive $114 billion revenue windfall over four years.

DAE partner Stephen Smith called it an “astonishing improvement” in budget finances, capping off a “remarkable comeback” from COVID-19.

But he warned this budget was likely to be the last that projected higher government revenue for some time, with a more “active” strategy needed to strengthen public finances as economic headwinds mount.

Revenue up, but future tough

Sky-high prices for key export commodities such as coal and gas and a near-record low jobless rate are fattening Commonwealth coffers big time.

But with predictions of a sharp downturn overseas, the backdrop of the October budget was “complex and uncertain”, Mr Smith said.

“Economic conditions have weakened since the May election, and the path to a soft landing has narrowed.”

Treasury is set to slash 2.25 percentage points from its global growth forecasts over the next two years in the October budget as Dr Chalmers warns global headwinds will take a $US2 trillion ($3.1 trillion) hit.

On Tuesday night, Dr Chalmers was heading to the US for meetings on the souring global economy after the IMF downgraded its growth forecasts ahead of likely recessions in the US and Europe.

“No matter what we have going for us in this country, we won’t be completely spared a global economic downturn,” he said.

KPMG senior economist Sarah Hunter said likely recessions in the US and Europe would be felt locally in lower growth and higher unemployment.

But because the Australian economy had recovered so strongly from the pandemic, it was unlikely a similar recession was in the offing Down Under.

“We are going to see the unemployment level come back up,” Dr Hunter said.

“But it’s at such a low level already … it’s more a normalisation in the labour market.”

Inflation, which is forecast to peak over the December quarter, will also weigh on households over the next six months.

Dr Chalmers said the government was focused on reducing household bills while delivering a broader increase in productive capacity, such as childcare subsidies.

“This is how you go about providing cost-of-living relief,” he said.

“I don’t want to get into the situation of spraying cash around in a way that is counter-productive and just makes it harder for the independent Reserve Bank.”