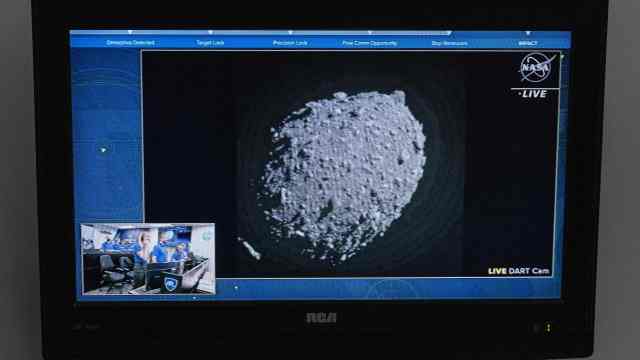 The spacecraft that NASA deliberately crashed into an asteroid last month succeeded in nudging the rocky moonlet out of its natural orbit – the first time humanity has altered the motion of a celestial body, NASA’s chief says.

Findings of telescope observations unveiled at a NASA news briefing showed that the kamikaze test flight of the DART spacecraft on September 26 achieved its primary objective: Changing the direction of an asteroid through sheer kinetic force.

The $US330 million ($521 million) proof-of-concept DART mission, which was seven years in development, also marked the world’s first test of a planetary defence system designed to prevent a potential doomsday meteorite collision with Earth.

The celestial target of the DART flight was an egg-shaped asteroid named Dimorphos, roughly the size of a football stadium, orbiting a parent asteroid about five times bigger called Didymos once every 11 hours, 55 minutes.

The aim was to fly the DART impacter vehicle – no bigger than a vending machine – directly into Dimorphos at about 22,530km/h, creating enough force to shift the moonlet’s orbital track closer to its larger companion.

Comparison of pre- and post-impact astronomical measurements of the Dimorphos orbit around Didymos showed a 32-minute shortening of its trajectory, proving the exercise as a viable technique to deflect an asteroid from a collision course with Earth, if such an asteroid were ever discovered.

APL scientists had predicted that the DART impact would shorten the orbital path of Dimorphos by at least 10 minutes. But they said they would have considered a change as little as 73 seconds a success.

Neither of the two asteroids involved in the test, nor DART, short for Double Asteroid Redirection Test, posed any threat to Earth, NASA scientists said.