Dall-E mini: Inside the AI art generator that has taken the internet by storm

Predictive insights is the ultimate application for AI in market research 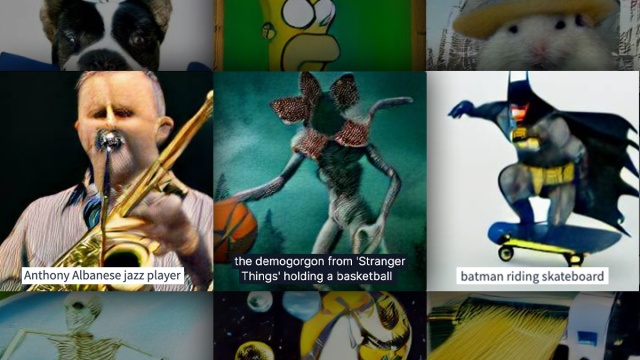 Ever wondered what Homer Simpson would look like if he was painted by Vincent Van Gogh? What about Batman riding a skateboard?

Well, you needn’t wonder much longer. A hugely popular artificial intelligence art generator has well and truly taken the internet by storm, making curious users’ most bizarre thoughts a reality.

All users need to do is input a simple description, and press ‘run’. Let’s use ‘Batman riding skateboard’ as an example.

In just a matter of seconds, the program is able to interpret the description and spit out nine images matching the request.

And voilà, watch Bruce Wayne turn into Tony Hawk before your very eyes. Here are some creations The New Daily put together earlier.

How does it work?

The model has really begun making waves online over the past two weeks, but Mr Dayma first built the program back in July 2021 as part of a Google AI competition.

He says Dall-E Mini draws on somewhere between 400 and 500 million pieces of “unfiltered data from the internet” and weaves them together in order to fulfil its users requests.

Speaking to The I, Mr Dayma said the driving idea behind the creation was to make AI accessible to everyday people.

“It was both a technical challenge and an interest in having something publicly available.”

The program can be a little hit or miss – which Mr Dayma openly acknowledges.

“The hardest part is definitely people,” he said. “If you draw a landscape with Dall-E, it’s amazing, because if there’s a small problem with a tree, nobody notices it and the landscape still looks great.

“But if there’s a problem with a face, we notice it. If there’s a small flaw with an eye, we can see it. With an avocado, even if it has flaws, it’s good enough.”

But it’s all part of the process. Like most artificial intelligence, Mr Dayma says Dall-E mini is learning as it goes.

“The model is still training. It’s still going to improve. Day by day, it only improves a little, but week by week, you can really notice it.”

Whereas he worked meticulously to train the model in its early days, it’s now training blindly – learning as it generates countless images based on its users’ requests.

Mr Dayma has been documenting the program’s learnings over time. This tweet perfectly illustrates the evolution of the AI’s capabilities. Using the prompt ‘An armchair in the shape of a Pikachu’ as an example, we can see how far Dall-E mini has come in just a matter of days.

As seen in the top row, the model’s interpretation is incredibly ambiguous. But as time goes on, it becomes much better at meshing the two concepts together.

Bizarre Dall-E mini creations have spread like wildfire online, some garnering hundreds of thousands of likes apiece. Here are some of our favourites so far.

The post Dall-E mini: Inside the AI art generator that has taken the internet by storm appeared first on The New Daily.