When RAT testing for COVID, should you also swab your throat?

COVID-19 impact on schools to be examined

COVID and mobility in focus at symposium

Sebastian Vettel out of Bahrain GP due to COVID-19

As the booster rollout ramps up, new COVID variants call for new vaccines 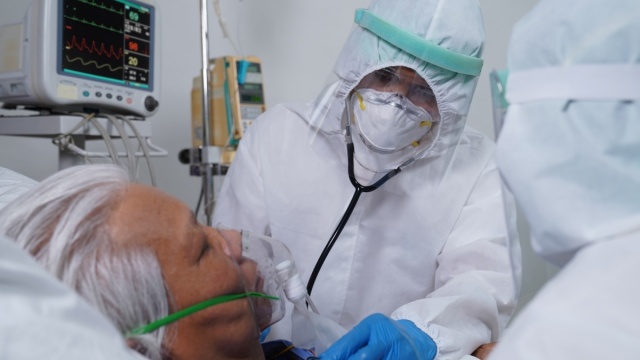 A leading epidemiologist has warned Australia is heading towards 50 COVID-19 deaths a day as more transmissible Omicron sub-variants become the nation’s dominant strains.

It comes after a new study found the actual number of virus cases during the peak of the Omicron wave was likely double that which was reported.

University of South Australia professor of biostatistics Adrian Esterman told The New Daily on Monday that COVID-19 deaths were slowly rising as governments wound back public health measures, and would likely average 50 a day by the end of July.

As for exactly why COVID-19 deaths are on the rise in Australia, Professor Esterman said it is “very hard to say why”. But he pointed to a number of potential factors.

He said the ‘Reff’, a key metric used to measure transmission, is up in almost all states.

As opposed to the basic reproduction number, which was used at the start of the pandemic, the ‘Reff’ (effective transmission number) assumes that people have some immunity to the virus – either from being vaccinated or having already been infected.

Professor Esterman said the raised Reffs are due to highly transmissible new sub-variants of the virus sweeping through the country.

Up until recently, the original Omicron strain, BA.2, had been the dominant strain.

But it’s now being taken over by strains BA.4 and BA.5, which are proving to be far more transmissible, and possibly more deadly.

“We will see case numbers go up, which are effectively production numbers going up. And this will have an impact on hospitalisations because of the sheer numbers,” he said.

“BA.5 appears to [be] infecting the lungs, whereas the BA.2 mainly infects the upper airways. In other words, BA.5 can cause a much more severe disease.

“I would expect there to be a higher hospitalisation rate because the lungs, you know, once it gets into lungs it’s a more severe disease.”

Despite his grim outlook on COVID-19 deaths, Professor Esterman said it’s “not all doom and gloom”.

He said he is hopeful that a new vaccine being developed by Moderna will play a key part in turning things around.

“It’s a mixture of the old Wuhan strain and Omicron. And it’s much more powerful than the existing Moderna mRNA vaccine,” he said.

“It’s still in phase three trials. They’re hoping they’ll be able to get it approved around August … When that comes out, it will definitely be worthwhile.”

Professor Esterman said there is also hope that Australia’s youngest will soon be able to get vaccinated against COVID-19, with children under five now eligible to receive their first dose in the US.

While Australia is busy combatting the BA.4 and BA.5 Omicron strains, new data has emerged about the initial BA.2 outbreak.

COVID infections soared in January thanks to the original Omicron variant, with states around the country reporting a combined 150,702 new cases on January 13.

But a new national antibody study says these mammoth figures could have been the tip of an iceberg, with the real number of COVID infections perhaps up to double what was initially reported.

The study, co-led by UNSW’s Kirby Institute for Infection and Immunity in Society and the National Centre for Immunisation Research and Surveillance, analysed 5185 samples from blood donors between the age of 18 to 89 six weeks after the outbreak’s peak.

The researchers estimate that at least 17 per cent of Australian adults had been infected with SARS-CoV-2, the virus that causes COVID-19, by the end of February 2022.

They estimate that the proportion of infected people was at least twice as high as indicated by cases reported to authorities by the end of February 2022.

Professor Esterman said there were a number of reasons why such big numbers could be flying under the radar.

“There are two issues. One is that people can’t be bothered [getting tested]. The second is that rapid antigen tests aren’t that accurate,” he said.

“As of today, there were 22,527 cases that were diagnosed through either a validation test or a PCR test, but it’s the tip of the iceberg. It’s probably several times that number of cases.”

The highest proportion of adults with the coronavirus antibodies was in Queensland (26 per cent), followed by Victoria (23 per cent), New South Wales (21 per cent) and Western Australia (0.5 per cent).

Evidence of past infection was also the highest among young blood donors (27 per cent), matching higher reported case numbers in this age group.

The researchers have now embarked on a second round of testing, aiming to test the prevalence of the Omicron sub-variants.

The post COVID-19 deaths on the rise: Epidemiologist’s grim prediction for Australia appeared first on The New Daily.