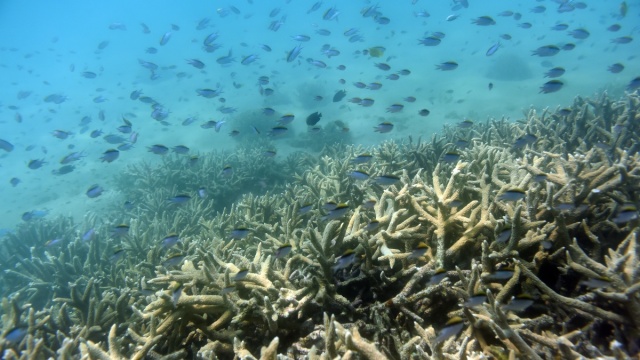 Coral cover has bounced back across two-thirds of the Great Barrier Reef, but scientists say its long-term health remains at risk from climate change.

The northern and central sections of the reef have the highest levels of coral cover recorded in 36 years of monitoring by the Australian Institute of Marine Science.

However coral cover has declined in the southern section, mainly due to ongoing outbreaks of crown-of-thorns starfish.

Dr Mike Emslie leads the agency’s long-term monitoring program and says the reef has shown it can still recover if given the chance.

He says the increased coral cover from Cape York south to Proserpine is the result of a few years of relative calm.

While the reef has suffered negative effects from mass coral bleaching events in 2020 and again this summer, they weren’t anywhere near as deadly for coral as the ones in 2016 and 2017.

The reef has also benefited from a few years without being battered by cyclones.

“Our latest surveys show the Great Barrier Reef is still an amazing place. It’s still vibrant. It can still recover if given the chance,” Dr Emslie says.

“But the impacts of climate change are going to progress as we move forward. Is it always going to remain that way is the million dollar question.”

Dr Emslie warns the resurgence could be short lived with the increase driven by fast-growing Acropora corals that are highly susceptible to bleaching, wave damage associated with cyclones and outbreaks of crown-of-thorns starfish.

“This isn’t the first time the Great Barrier Reef has recovered. It’s been seen before. The rate of increase has been seen before. But all it takes is another summer of bad bleaching or a cyclone, which we haven’t had for a while, and things can change.”

The latest monitoring report is based on surveys at 87 reefs between August last year and May this year.

About half of that work was done before this year’s bleaching event.

Scientists don’t expect widespread coral mortality but also say the full picture won’t be known until this time next year, after the next round of surveys.

Even if widespread coral deaths don’t eventuate, the reef will still suffer because heat stress hurts coral growth and reproduction and increases susceptibility to disease.

“The fact that we’ve had four bleaching events in seven years … we’re kind of in uncharted waters now. We’ve never had this frequency of bleaching.”

The survey report estimates hard coral cover in the northern section of the reef, from Cape York to Cooktown, is sitting at 36 per cent.

That’s the highest level recorded in the monitoring program’s 36-year history and a major turnaround from the most recent low of 13 per cent in 2017.

In the central section of the reef from Cooktown to Proserpine hard coral cover is estimated at 33 per cent, also the highest on record and up from 14 per cent in 2019.

But the situation is different in the southern section of the reef from Proserpine to Gladstone, where estimated coral cover is at 34 per cent, down four per cent on last year due to outbreaks of the coral-munching crown-of-thorns starfish.