Melbourne climbs back to AFL summit after dominating Brisbane Lions

AFL: Underdog Bombers give Saints a lesson in teamwork and determination

Tigers hold off Blues in tight tussle at wet MCG

More heat on North after meek loss to GWS

AFL plans for normality in 2022: McLachlan 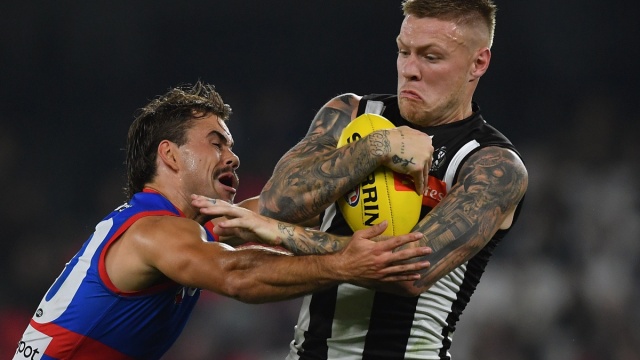 Controversial Collingwood star Jordan De Goey has been given personal leave by the AFL club, with no time frame set on his return.

It comes a day after he was hit with a $25,000 suspended fine and he apologised for his “disrespectful” conduct while partying in Bali.

“Collingwood advise player Jordan De Goey has been granted personal leave by the club and will not take part in the round 15 match against GWS (on Sunday),” the club said in a statement on Wednesday evening.

“Jordan has been absent from training this week and the club will continue to support him on his return to the football program.”

The Club advises that Jordan De Goey has been granted personal leave and will not take part in the Round 15 match against the GWS GIANTS.

Footage emerged on social media last week of De Goey, who was given permission by the club to travel to Bali on his mid-season break, making crude gestures while at a nightclub.

The fine is suspended through to the end of the season and dependent on good behaviour.

De Goey will also “undertake further behavioural education” in addition to an existing counselling program, but has avoided any suspension from playing duties.

Collingwood has also put contract talks with the 26-year-old, who is entering free agency, on hold until season’s end.

“The actions shown in the video footage are disrespectful and I accept that I have betrayed the trust the club showed in me by allowing me to take my mid-season break overseas,” De Goey said in a statement on Tuesday.

“My actions have fallen short of the standards expected of me as a person, as an AFL footballer and as a representative of Collingwood.

“I had worked hard this year to establish trust and confidence in me to make better decisions and through no one’s fault but my own, I have undone that trust.

“Again, I apologise for my disrespectful conduct. I understand that I have let many people down and that I have much work to do to again rebuild trust.”

The statement was in stark contrast to his initial response via Instagram, where he had lamented “persecution” of athletes by the media.

De Goey also said he was diagnosed with ADHD last year and was “trying to become more aware” of why he made mistakes.

He was particularly dismayed by vision of De Goey pulling at a woman’s top, almost exposing her breast.

The Bali incident comes after De Goey was stood down by Collingwood last October when he was arrested for a drunken incident at a New York nightclub.

Mr Anderson also said on Tuesday that De Goey would speak in the next couple of days, but it is unclear whether this will now happen given the player is on leave.

The AFL said Collingwood had “handled the matter appropriately” and the league wouldn’t take further action against De Goey, while condemning his behaviour as setting a bad example.