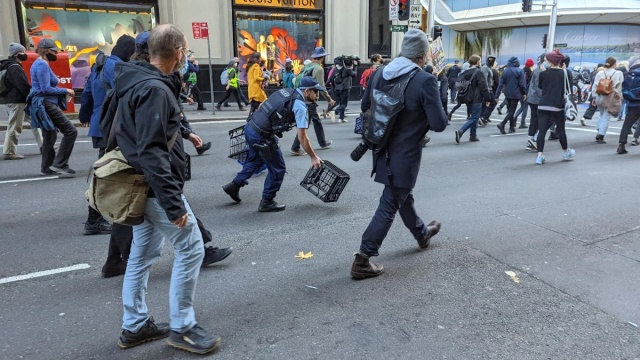 Protesters have marched down a major Sydney thoroughfare and have blocked the entrance to Sydney Harbour Tunnel after climate activists threatened a week of illegal protests.

Blockade Australia has begun a “Sydney mobilisation to resist climate destruction”, with groups disrupting intersections in the city.

Television footage on Monday showed a group of about 50 masked protesters marching north down Kent Street towards the harbour after moving through the city, beginning at Elizabeth Street, between Park and Bathurst streets.

NSW Police were out in force in Sydney’s CBD and had a heavy presence on the harbour bridge after Blockade Australia threatened a resurgence in its campaign, which has previously shut down Port Botany, the bridge and the Spit bridge.

The Transport Management Centre said the Sydney Harbour Tunnel was closed at the entrance in North Sydney, after a protester parked a car blocking access.

Blockade Australia livestreamed a video of the young woman in her car blocking the tunnel. It said she was from Lismore, the epicentre of unprecedented floods earlier this year in northern NSW.

All traffic was being diverted via the Sydney Harbour Bridge and vehicles were backed up for several kilometres.

Blockade Australia said it would cause further disruptions in the days ahead.

“Disruption to the infrastructure of Australia’s project of exploitation is essential in cutting through the climate denial that this system survives off,” it said.

Protesters now face a maximum penalty of two years’ jail and $22,000 fines for disrupting traffic or preventing access on roads.