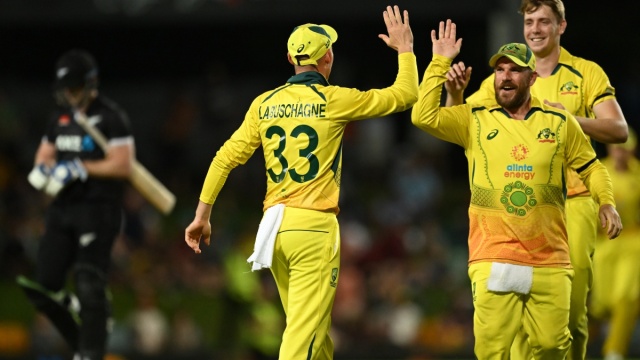 It came down to the final over but Australia ensured skipper Aaron Finch retired from 50-over cricket with a series sweep over New Zealand as the hosts held on to win the third and final one-day international by 25 runs.

In his 146th and last ODI for his country, Finch’s side set the Black Caps 268 to win at Cazalys Stadium in Cairns after Steve Smith anchored their innings with 105 runs off 131 balls, his 12th ODI century.

New Zealand chased bravely, its openers flying out the gates, skipper Kane Williamson steady at the crease and the middle order firing until the death.

But as it had in the first two games, the loss of wickets at inopportune times cost the visitors dearly.

The end of an era.

Aaron Finch walks off to a standing ovation 👏👏#AUSvNZ pic.twitter.com/gi1W6fwBpb

Their openers fell within three overs of each other, and when Tom Latham departed for 10 they’d lost 3-28.

The dangerous Daryl Mitchell top-edged to Smith after a brisk 16, and when Williamson was run out in a horror mix-up with Glenn Phillips, New Zealand was in trouble at 5-112.

Its middle order began to rally.

Phillips and James Neesham struck their best partnership of the series (69 off 58), and after Neesham was caught at long-on for 36 off 34 balls, Phillips and Mitchell Santner combined for a 51-run stand.

Australia too good once again in Cairns as they complete a series sweep in skipper Aaron Finch's ODI farewell! #AUSvNZ pic.twitter.com/0sCk9ssRyi

But when Phillips was caught at fine leg for 47, the Black Caps’ charge wilted.

They were dismissed for 242 off 49.5 overs to continue their winless ODI record in Australia since 2009.

Finch tempted the crowd before the final over by pretending to warm up for a bowl, but Mitchell Starc nabbed the last two wickets to complete the 3-0 series whitewash.

Although Finch couldn’t produce a fairytale farewell innings – being clean bowled by Tim Southee for five – Australia’s total was its highest in this Chappell-Hadlee series.

After Finch left to a standing ovation, Australia was dawdling at 2-19 from 10 overs before Smith and Labuschagne got to work.

The pair raised the bat within an over of each other, for Smith his 28th ODI half century and Labuschagne his fifth, before the latter departed through a mistimed pull shot off Lockie Ferguson.

Smith then became just the third Australian to score an ODI century this year, after Travis Head and Ben McDermott, before Santner ended his 131-ball stay in the 45th over.

The post Clean sweep of Chappell-Hadlee Trophy sends out Aaron Finch on a high appeared first on The New Daily.