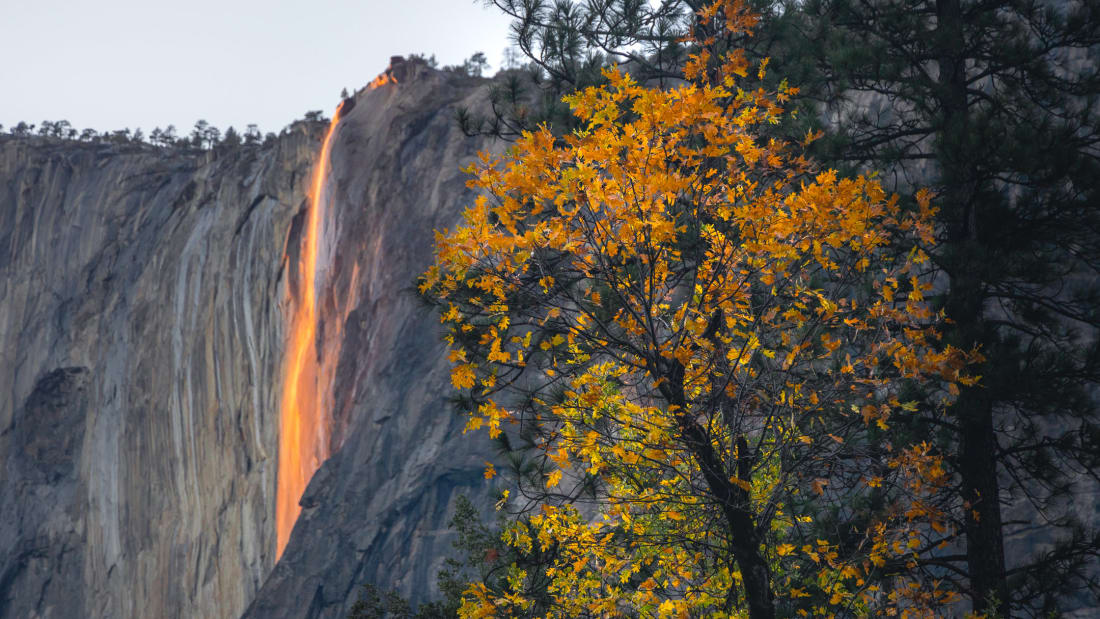 Some visitors to Yosemite National Park in the USA this week were delighted to see a glowing ribbon of water that looked like molten lava cascade down Horsetail Fall on El Capitan.

Horsetail Fall doesn’t usually flow at this time of year, but the recent severe storms that swept through the area brought it surging back to life and created the phenomenon known as a “firefall.”

The “firefall” usually occurs on clear evenings in late February when the setting sun shines through the fall at just the right angle. The event is such a big attraction that Yosemite required online reservations earlier this year to limit crowds.

Park officials said in a Facebook post on Monday that the Yosemite Valley got more than 6 inches of rain in a 36-hour period and that a few feet of snow fell at higher elevations.

Edgar Le, who was visiting from Rochester, New York, told CNN it was “extraordinary” to see the “firefall” on Tuesday while hiking near the Yosemite Lodge.

“Like looking at a stream of lava purging down from the top of the El Capitan,” he said. “Seeing the Firefall is more than a miracle to me as a landscape photographer.”

San Francisco creative director and photographer Scott Oller heard the “firefall” might be visible on Tuesday, so he left work at about 1pm and made the drive to Yosemite. He told CNN that he got there with about 45 minutes to spare.

Mr Oller said he saw the “firefall” for the first time in February after several failed attempts in previous years.

“The “firefall” is one of the most surreal things I’ve ever seen,” Mr Oller said. “It’s almost like watching a total solar eclipse or something, you just freeze up in awe.”

He said he found a pullout area about 2,000 feet from Horsetail fall where he could park and get out his gear.

There were only about 10 other people there, which is a lot less crowded than his previous trips.

“In the winter there’s just an endless sea of tripods,” Mr Oller said.

Mr Oller said that many of the people he saw seemed to be surprised tourists who pulled over their cars because they were amazed by what they were seeing.

“It seems unbelievable that that could even happen and it just keeps getting better and better as the minutes go by,” Mr Oller said. “The light turns from gold to fiery orange to a faint pink. It’s unreal.”

The heavy rain also caused water to roar over the 2,425-foot Yosemite Falls.