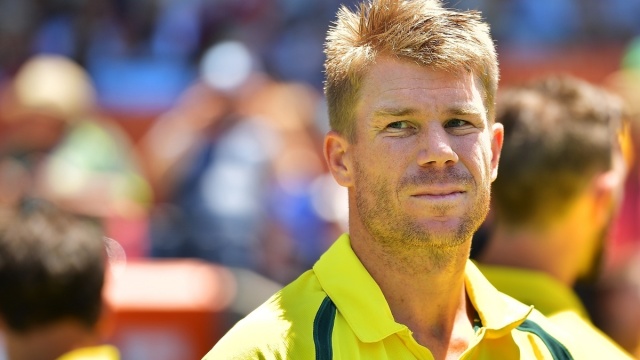 Warner has had a leadership ban hanging over his head since the 2018 ball-tampering scandal, with the opening bat keen to have the punishment reversed.

The 35-year-old has been mentioned as a candidate for Australia’s vacant one-day captaincy, but cannot fulfil the role under his sanctions.

Under current rules players who accept a sanction under the code of ethics waive their right to have the matter reviewed.

It means CA’s code would need to be rewritten for Warner’s ban to be reviewed, something directors will discuss at Friday’s board meeting in Hobart.

“The view within Cricket Australia is that David is doing particularly well on the field and making a great contribution off the field,” chairman Lachlan Henderson said.

“The first step in terms of David’s leadership ban is to review the code and see if those sanctions are able to be reviewed.

“And the appropriate revisions to that code that would need to be made.”

Warner was suspended for a year and banned from ever holding another leadership position within the Australian cricket side after being found guilty of ball tampering in South Africa in 2018. At the time, he said he accepted the lifetime leadership ban.

“At the end of the day, you’ve just got to respect the decision and move on and get on with it,” he said.

“I haven’t looked back, I’ve just kept on looking forward. And my job is to come out and score runs.”

But on Thursday, Henderson said the code would be rewritten if deemed necessary before any call on Australia’s one-day captaincy.

“Our intention is to review the code as quick as is practical. It’s not in anyone’s interest for us to delay that,” Henderson said.

“It would be in time for any future leadership conversations in relation to David.”

There are also other hurdles to clear. CA is wary any change to the code in consultation with ethics commissioner Simon Longstaff could have implications on matters beyond Warner.

At the same time, CEO Nick Hockley stressed players had a right to show they had changed since the point of being handed a lifetime ban.

“In very simple terms, we are looking at sanctions to be reviewed for good behaviour and growth after a period of time,” Hockley said.

“Pending tomorrow’s discussion, there would then need to be a revision of the code and that would need to be approved by the board.”

The pair’s comments came after CA reported a $5.1 million loss for the 2021-22 financial year at Thursday’s AGM.

CA largely blamed the loss on challenges presented by the pandemic, as well as a drop in media rights from Britain for last summer’s Ashes.

Former women’s quick Clea Smith was also unanimously voted onto the CA board as the sole former player serving as director, after Mel Jones’ decision to exit.

Smith has previously held roles at the Australian Cricketers’ Association and was influential in the parental leave policy being introduced in 2019.

Former Cricket Victoria chair David Maddocks was also voted in as a replacement for the outgoing Michelle Tredenick.

Meanwhile CA remains undecided whether to lift a ban on playing Afghanistan in bilateral matches before a three-match ODI series early next year.

Australia refused to host the country while under Taliban rule last summer, but have agreed to face off against them in the T20 World Cup on November 4 as it is an ICC event.