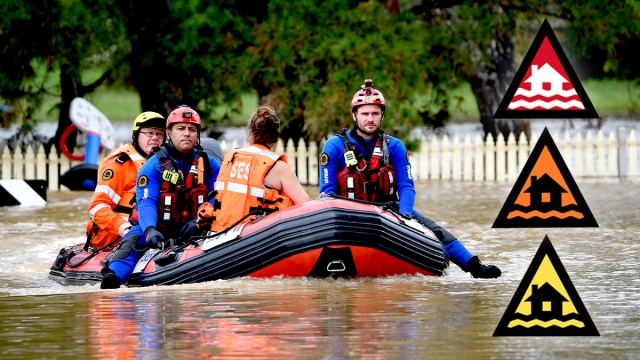 Australians will be facing yet more flood risks as wet weather continues in several states.

Residents in New South Wales, Victoria and Queensland have been warned of more heavy rainfall next week, as the Bureau of Meteorology (BoM) monitors flooding risks across eastern Australia.

Rainfall totals of 15 to 20 millimetres are expected across southern Queensland, inland NSW and northern Victoria next week, the BoM stated on Thursday.

With catchments in NSW, southern Queensland and northern Victoria already affected by recent rainfall, there could be a renewed risk of flooding in some areas, including the NSW central tablelands regions.

“There will be some kind of river level response, either renewed rises or potentially moving into next category,” BoM meteorologist Jenny Sturrock told TND.

There are also flood risks for parts of north-east Tasmania, she said.

“That’s a catchment area that’s already seen some rainfall over the past month. It’s a little bit sensitive to any further rainfall and there could be some rainfall  … during Wednesday and Thursday next week.”

The nationally consistent Australian Warning System (AWS) came into effect overnight in NSW, with the state’s emergency services optimistic they will make weather warnings clearer for the public.

The AWS consists of three levels – advice; watch and act, and emergency warning.

Each warning has three components:

The NSW SES stated the approach will provide communities with greater clarity, with the state’s emergency services having experienced their busiest 12-month period on record.

“If you live in a community that has received flood warnings in the past, it is important to learn how the NSW SES warnings are changing, and prepare for what action you will take when a future disaster strikes.”

The AWS should provide a more consistent approach to emergency advice.

States and territories are gradually transitioning to the new system, with Victoria making the shift earlier this year.

Along with the new warning tiers, the NSW SES have also launched a new interactive online map, where residents will be able to view current warnings around them.

The BoM confirmed on Thursday in its rainfall forecast for October to December that Australians can expect a wet summer, with cooler temperatures between October and December.

Ms Gamble said it was “rare” to see so much water flowing through catchments in the country’s east.

“Any further rain increases the flood risk, particularly in eastern Australia, where soils are wet, and rivers and storage levels are already high.”

As for the western states, BoM said drier-than-usual conditions are likely for large parts of Western Australia and even western parts of Tasmania.

The post Brace for deluge: Eastern states face risk of more floods ahead of a wet, cool summer appeared first on The New Daily.