No end to NSW train strikes as talks go on

Appeal over mysterious deaths of sisters 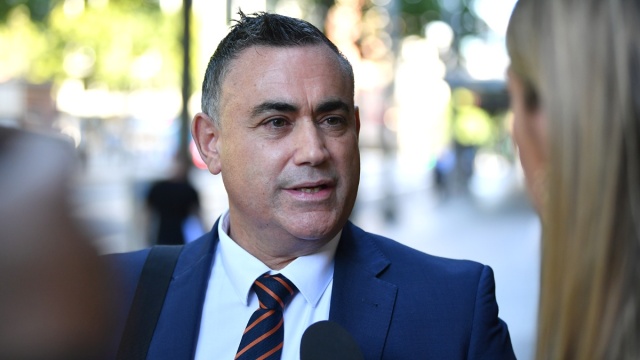 John Barilaro’s ex-chief of staff will be quizzed on what she knows about the former NSW deputy premier’s controversial appointment as senior trade and investment commissioner to the Americas.

A parliamentary committee will hear from Siobhan Hamblin on Friday, two days after the scandal over the US trade job claimed the scalp of now former trade minister Stuart Ayres.

Labor has pledged to abolish all senior trade and investment commissioner roles if it wins the March state election following “a series of embarrassing revelations surrounding the government’s touted Global NSW Strategy”.

“The government’s senior trade roles have been mired in scandal – not only about who is being appointed to these roles and how, but also the overseas activities at taxpayers’ expense,” opposition trade spokesman Anoulack Chanthivong said on Friday.

Contracts will not be renewed and “a suitable replacement program” will be developed.

Mr Ayres was forced out of cabinet and quit the deputy Liberal leadership on Wednesday over his involvement in the recruitment of his former colleague to the coveted role.

Premier Dominic Perrottet accepted his resignation after reading a draft of a separate review by the Department of Premier and Cabinet, which raised questions about whether he breached the ministerial code of conduct.

“The review clearly demonstrates that the process was not at arm’s length,” Mr Perrottet said on Wednesday.

Investment NSW CEO Amy Brown agreed Mr Ayres was not at arm’s length during the recruitment process when she gave evidence to the inquiry on Wednesday.

She said she was nervous about the appointment of Mr Barilaro and its potential for controversy, and did not want to be the only one standing behind the decision.

Mr Perrottet and Mr Ayres said from the start of the scandal in June that it was Ms Brown’s decision to appoint Mr Barilaro to the $500,000-a-year trade posting.

She maintained it was her decision, but said she had been somewhat influenced by uncertainty on whether the role would remain a public service appointment or change to a ministerial one.

She said she didn’t want to give someone the job only for them to have it taken off them at the whim of the government.

Ms Brown may be called back for further evidence before the inquiry concludes, potentially after Mr Barilaro’s highly anticipated appearance on Monday.

Ms Bell is likely to be asked on Friday about the associated perks of overseas trade ambassador roles including superannuation and cost of living allowances.

Ms Brown was asked about remuneration for London agent-general Stephen Cartwright, the former Business Australia chief executive who secured a cost of living allowance above $100,000 for the UK role.

Ms Brown said that allowance was the highest of all the roles.

Mr Barilaro stepped down from the role as senior trade and investment commissioner to the Americas less than two weeks after his appointment was announced, saying it had become untenable.