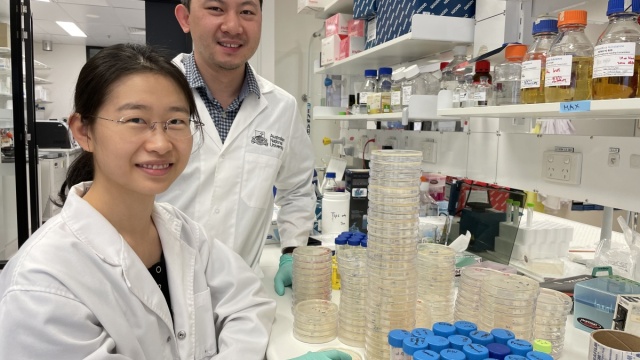 A group of bacteria-killing proteins inside the body could help develop more effective drugs, with the potential to eliminate diseases including meningitis, pneumonia and sepsis, a new study has shown.

A specific group of immune peptide proteins have been shown to kill harmful bacteria by busting them open like an “axe chopping open a watermelon”, scientists at the Australian National University told AAP.

The immune proteins, known as guanylate-binding proteins (GBPs), have shown potential to directly bind to and kill specific types of bacteria, including the pathogens causing meningitis and sepsis.

The study paves the way for new treatments against other infectious diseases, including pneumonia and food poisoning, and researchers say the proteins could also be used in combination with existing antibiotics.

Bacteria-killing proteins inside our immune systems could eliminate meningitis, pneumonia and sepsis. 🦠#ANUExperts @SiMingMan1 and Shouya Feng say these proteins could lead to smarter and more effective drug treatments.

“It does literally chop the bacteria open and it’s like an axe chopping open a watermelon,” Professor Man said.

“Literally, you see the guts of the watermelon coming right out. It’s the same with this bacteria.

“(It) might sound disgusting, but it’s actually very fun to look at because you’re destroying bad things.”

He said the researchers discovered the “killer peptide protein” while researching how immune cells attack different kinds of bacteria and viruses.

“We found this group of proteins have this remarkable ability to just immediately know where the pathogens or the germs are when they enter our immune cells,” Professor Man said.

Lead author Shouya Feng said she believes the peptide has a good chance to be implemented in the market.

“I think our peptide has a very high potential … for the design to be modified or even improved to be used clinically,” Professor Feng said.

Research is under way into developing peptides to fight against pneumonia and food poisoning.

Drug-resistant diseases currently cause about 700,000 deaths globally every year, a figure expected to climb to 10 million by 2050, according to World Health Organisation research.

“We know that we are running out of antibiotics to treat people,” Professor Man said.

“Antibiotics have been used for many, many decades, and often we overuse them, and it’s also been used on farm animals.

“We think that our (peptides) could bring new hope to people with multi-drug-resistant infection, that antibiotics no longer work (against).”

The research was published in Nature Communications last week.