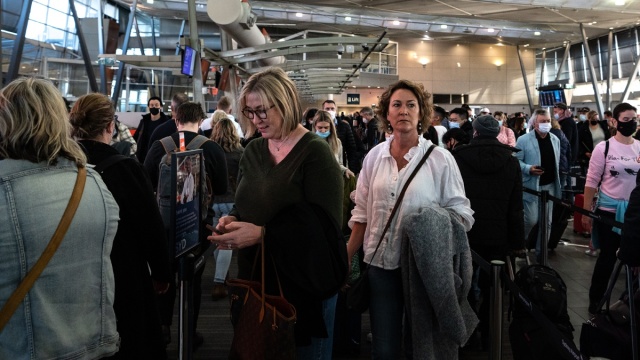 COVID rules have been further wound back across Australia, despite two new subvariants driving a surge in case numbers – prompting alarm among some experts.

Victoria, New South Wales and Queensland have all announced an end to vaccine mandates for many workplaces, while Western Australia said on Friday it would end daily updates of case numbers.

It came as NSW Health warned that two Omicron subvariants, BA.4 and BA.5, would soon become the state’s dominant strains. NSW Health said the new subvariants would likely prompt a further jump in infections – including among those who have already had COVID-19.

Victoria has also warned the subvariants are taking over and account for up to 17 per cent of cases since they were first detected in April. They are expected to be dominant within weeks.

“This is in line with similar patterns in NSW and Queensland. In NSW, BA.4/BA.5 represented over one-third of COVID-19 variants in isolates from people testing positive by PCR by 11 June,” Victorian health authorities said on Friday.

“In Queensland, BA.4/BA.5 is expected to become dominant in the next two weeks. Both states have seen a significant rise in the number of people hospitalised with COVID-19 during June.

“The prevalence of BA.4/BA.5 in Victoria is likely to result in an increase in cases – including reinfections – and hospital admissions. This is because the strain has a greater ability than BA.2 to evade immunity provided by vaccination and earlier COVID-19 infection.”

On Friday, chief medical officer Paul Kelly renewed a call for Australians to get COVID booster shots, warning that reinfections from the Omicron subvariants were eluding immune responses bolstered by vaccinations.

“We will see reinfections over the coming weeks and months, unfortunately with that one. But what we’re not seeing is a large increase in severe disease,” he said.

“That’s really due to the vaccine protection, which can be boosted with a third and fourth dose.”

The federal government has launched an $11 million “take on winter” campaign to target the six million Australians who have yet to get their third vaccine. It will also focus on addressing the vaccination gap among the Indigenous community, and parents of children aged five-11.

But fourth (or winter) doses remain restricted to those over 65 (over 50 for Aboriginal or Torres Strait Islanders), residents of aged or disability care and the severely immunocompromised, as well as those with particular medical conditions.

“There are still, as everyone knows, very high case numbers of COVID and concerns,” he said on Wednesday.

“As you will see from state modelling being released over the last couple of days, the case numbers might even climb again as we see a higher prevalence of the BA.4 and BA.5 sub-variants of Omicron.”

Despite the recent surge, the federal and state governments have continued to wind back pandemic restrictions.

Earlier in June, the federal government removed requirements to wear masks in airports, following a recommendation from the Australian Health Protection Principal Committee.

Qantas has also dumped masks on some outbound overseas flights. They remain mandatory on inward flights and domestic flights – although Mr Butler has hinted that might soon also go.

“If advice comes to me … about lifting the mask mandate on incoming flights, it would be my intention to consult with state ministers,” he said.

But the strategy seems to still be in its infancy. Federal health officials said they would heed updated clinical advice and epidemiology – but have not confirmed any changes prompted by the emergence of the latest subvariants.

“It’s not as bad as UK, where people don’t have to report a positive test anymore … If the territory governments and the federal government keep going the way they’re going, we’ll end up in the same situation.”

“I think we’re currently striking the right balance between people needing to get back to regular life,” she said.

“We’ve got to acknowledge that basically COVID sucks, right? We all we hate it, we want it to go away forever. And we wish it never happened … But unfortunately, it doesn’t look like it’s ever gonna go anywhere.

“So now let’s try and live our life … And I think people are starting to have a better time, and that’s important.”

Professor Martiniuk said the best way for Australians to protect themselves against the latest highly transmissible subvariants was to make sure they had  both flu jabs and COVID boosters.

“The good thing is, is the vaccines, though they were developed on the original strain, they are holding up very well against severe disease and death,” she said.

The post Australia’s COVID rules wound back – despite surging infections appeared first on The New Daily.