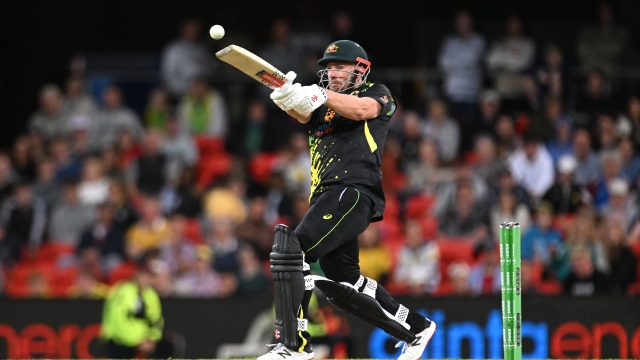 Australia’s veteran wicketkeeper-batsman Matthew Wade was dropped twice in the final over as the hosts secured a three-wicket victory over the West Indies with one ball to spare in the T20 international at Metricon Stadium.

Wade (39 not out off 29 balls) was dropped by Kyle Mayers and Raymon Reifer with Sheldon Cottrell the unlucky bowler.

Australia captain Aaron Finch (58 off 53 balls) pushed himself down the order to No.4 on Wednesday to give all-rounder Cameron Green a crack at opening the innings where he had been so successful on the recent T20 tour of India.

Chasing the West Indies total of 9-145, Australia was in dire trouble at 5-58 in just the eighth over.

Australia's latest incarnation of 'The Finisher' does it again #AUSvWI pic.twitter.com/7OWvJsYGNm

Finch found a willing ally in Wade, with the duo combining for a 69-run, sixth-wicket stand against the gallant visitors.

Finch had said pre-match that he didn’t think Green would be a late inclusion in the already named squad for the upcoming T20 World Cup, but his own move down the order won’t stop that speculation.

Finch was at the crease early after David Warner and Mitch Marsh departed in Cottrell’s opening over.

Marsh gone as well and Cottrell's brought out the salute twice in his first over #AUSvWI https://t.co/9NS0ZaQy23

The Australian skipper had spoken of his desire for his team to be over-aggressive rather than cautious in their approach.

He said it was “high risk, high reward”.

On this occasion, though, he adopted a more measured approach after the top order had thrown their wickets away.

Not as short, though, as that of Glenn Maxwell and Tim David who both made ducks after undisciplined leg-side swipes.

Earlier, West Indies opener Mayers (39 off 36) was in fine form early and took the game to the bowlers with an array of exquisite strokes.

Mayers played one shot of immense class when he rocked onto the back foot and punched a Green delivery high over the cover boundary.

The West Indies were 1-47 after five overs and set for a total of 180-plus before spinners Adam Zampa and  Maxwell stemmed the run flow.

Australia’s strike fast bowlers Josh Hazlewood (3-35 off four) and Pat Cummins (2-22 off four) then turned the screws before a late cameo by West Indies bowling all-rounder Odean Smith (27 off 17) gave them a chance.