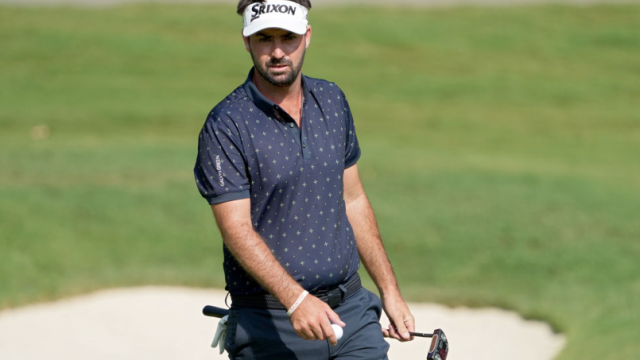 Australia’s Brett Drewitt has gone from little-known PGA Tour underdog to contender with surgically precise rounds that have placed him three strokes off the lead in the final event of the season.

Having missed the cut in his last six tournaments, 31-year-old Drewitt surged up the leader board at the Wyndham Championship in North Carolina after rounds of 67 67.

Drewitt shot 80 77 in his last start at the Rocket Mortgage Classic amid 15 missed cuts from 22 starts this season and he sits a lowly 221st in the FedEx Cup standings with $US105,466 in prize money.

In his second full season on the tour, Drewitt has a best result of tied 39th this season and his career-best is tied 27th in the 2016-17 season.

Fellow Australian Cameron Percy is tied 15th going into the weekend after following his opening 65 with a 70.

Adam Scott scraped through the cut at two under after a 70 while fellow Aussie ex-world No.1 Jason Day withdrew ahead of Friday’s second round due to an illness.

Day’s positioning for the start of the FedEx Cup Playoffs at next week’s St. Jude Championship in Memphis appears to be secure, however.

He entered this week at No.115 in the points list, and the top 125 advance to the first playoff event.