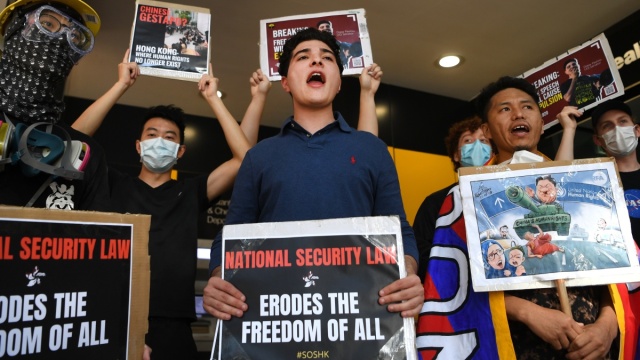 Australian activist Drew Pavlou claims he will be arrested if he tries to leave the United Kingdom after being accused of sending a bomb threat to China’s London embassy.

But his lawyer has been told Pavlou’s “rather difficult” predicament should not stop him providing instructions on a damages claim in Brisbane Supreme Court.

Pavlou was detained in London while protesting outside the Chinese embassy last week after authorities alleged he had emailed the threat.

However, Pavlou says the Chinese embassy is responsible for the email that led to his arrest.

His lawyer provided an update when Pavlou’s damages claim against University of Queensland was mentioned in Brisbane on Friday.

“Whilst in the UK he was subject of a false flag operation by the Chinese embassy which generated a falsified email reporting to come from him threatening an attack on the embassy,” he told the court.

“He was arrested by Metropolitan Police under the UK terrorism legislation and held … for 24 hours without consulate support or access to lawyers.

“By a curious arrangement which I cannot understand, although he has not been charged with anything he has been advised by the Metropolitan Police that if he attempts to leave the country he will be arrested at the airport.”

Pavlou is suing UQ for $3.5 million after he was suspended by the university in 2020, referring to the case as a “David versus Goliath battle”.

His lawyer said Pavlou’s arrest had made it tough to receive instructions on the damages claim.

However, he received a stern response from Justice Frances Williams before she adjourned the matter until August 26.

“I appreciate that there may be some difficulties with your client’s current situation but I am having difficulty seeing how you can’t get instructions,” she said.

“Last I was aware there were pretty good communications between the UK and Australia.”

Justice Williams said it was also concerning that the matter was in “no way in any respect close to being ready for trial” two years after Pavlou announced he was suing UQ.

In June 2020 Pavlou confirmed the damages claim, alleging “deceit, conspiracy, harassment, defamation (and) breach of contract” by the university.

He claimed there was a “political vendetta” against him after he criticised the institution’s ties to Beijing.

The activist received a two-year UQ ban in June 2020 following a disciplinary hearing on 11 allegations of misconduct.

Pavlou claimed it was related to his on-campus activism in support of Hong Kong and criticism of the Chinese Communist Party.

The university alleged Pavlou breached its code of conduct by organising protests on campus, with one ending in a violent clash with pro-China Communist supporters.

The suspension was later reduced to a semester while also completing 25 hours of “campus service”.

But the legal action was dismissed in August 2020 when a magistrate ruled Dr Xu had diplomatic immunity.

Before his London embassy arrest, Pavlou was ejected from this month’s Wimbledon men’s final brandishing a “Where is Peng Shuai?” sign, referring to the Chinese tennis star he claims is being persecuted.

He had made a similar protest at the Australian Open.

In recent months, Pavlou was also among protesters at Chinese ambassador Xiao Qian’s speech at a Sydney university and organised an impersonator of North Korea’s leader to gatecrash ex-prime minister Scott Morrison’s campaign in Melbourne.