Paul Bongiorno: Not being Scott Morrison gets better by the day for Anthony Albanese

More than $1.2 billion in emergency funding lying in cash as floods rage

Morrison slaps back at ‘narcs’ in storm over welding attempt

'Must have a good local member': PM defends funding controversy

Australian politics made a fool of itself in 2021.There's more fun on the way

'Another lie': Morrison's 'mad claims' on EVs have Labor outraged 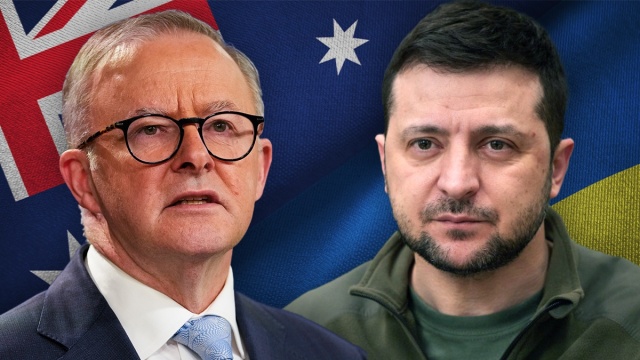 In his first month on the world stage Anthony Albanese received top marks from members of the foreign policy and defence establishment and members of its typing pool.

But Mr Albanese is now facing criticism for chewing over one overseas engagement that many would consider a slam dunk for any prime minister.

On Wednesday he again seemed to duck a question about whether he would be accepting an invitation to visit Ukraine President Volodymyr Zelensky in Kyiv at the end of the month.

“We will take advice from the national security agencies and from Defence and will respond to that advice as appropriate,” Mr Albanese said.

He made similarly non-committal remarks nearly a week ago, as the most likely tie-in for such a trip, a visit to Madrid and a meeting with NATO secretary general Jens Stoltenberg, draws nearer.

Democracies ‘should support each other’

This has caught the attention of Peter Jennings, former head of the Australian Strategic Policy Institute and the avatar of sensible thinking on national defence.

“I think not travelling on the basis of security concerns is going to look fairly ridiculous. He could be in and out of Kyiv literally within three hours.

“Democracies should be supporting each other.

“My particular concern is that China is looking at Ukraine very much to sort of assume and accumulate lessons for its own designs on Taiwan.”

Mr Albanese’s equivocations are indeed unusual given the close to universal condemnation that followed Russia’s invasion and a previous government response ranging from sanctions to requesting that social media sites remove videos from Russian state television.

Last week Mr Albanese said he had only just heard of the invitation from President Zelensky in a just-published newspaper report.

But talk in Canberra’s diplomatic circles suggest that Ukraine’s energetic ambassador Vasyl Myroshnychenko has been engaged in a full-frontal lobbying effort over a visit that had been his top priority since before the election.

“He is still holding out hope of a meeting,” one source said of his latest overture.

He said Mr Myroshnychenko is seeking to hand deliver a request for support from President Zelensky, which was apparently yet to produce a top-level meeting in the PMO.

The ambassador’s public statements suggest private lobbying has been unrequited.

“If not now, when?” he asked last week of the visit.

Two days after the election he told Australian media the president would soon invite Mr Albanese to Kyiv, then he returned from Ukraine with a written invitation and even floated plans for a free trade agreement with the new government.

Meanwhile, the leaders of France, Germany and Italy have been able to visit the President’s Kyiv bunker in the past week – so too has Hollywood star Ben Stiller.

One Canberra observer said President Zelensky had sought foreign visits “in the same way a hunter collects trophies” and media coverage had inflated perceptions of their significance.

Emmanuel Macron had faced domestic criticism for not visiting earlier but said he only wished to go to Kyiv when consequential.

Boris Johnson has visited Kyiv twice, including recently even as his own office was besieged.

He even squeezed in a mention during a post-election phone call with Mr Albanese, something that was only included in London’s official readout following the call.

The UK PM recently warned that the West must not drag its feet on continued support in the hope that weakening Ukraine’s army is conducive to a peace deal.

Former PM Scott Morrison signed off on a $285 million aid package, including a fleet of armoured vehicles, and said he would not sit next to Vladimir Putin around a G20 table when Indonesia hosts the leaders summit this year.

Mr Albanese has broken with his predecessor on that score and says the meeting is too important to miss, but notes that President Zelensky will be appearing via video link.

Indonesian President Joko Widodo is tipped to visit Ukraine – as one of the world’s largest countries to have maintained its long-standing links to Russia, the move is being interpreted as a potentially credible play at using its non-aligned status to broker peace.

Australia is the second-largest contributor to the Ukraine outside of NATO.

The former chief of the Australian Army, Professor Peter Leahy, told The New Daily the meeting was not comparatively important at a time when possible NATO expansion was unfolding.

“Australians and the Australian government had made their position abundantly clear. They’re opposed to the invasion of Ukraine by Russia, and watching day by day as Russia commits more crimes and atrocities,” Professor Leahy said.

“There’s a lot going on in the national security space and the Prime Minister, I think, is right to allocate the substantial amount of his time to business with NATO.”